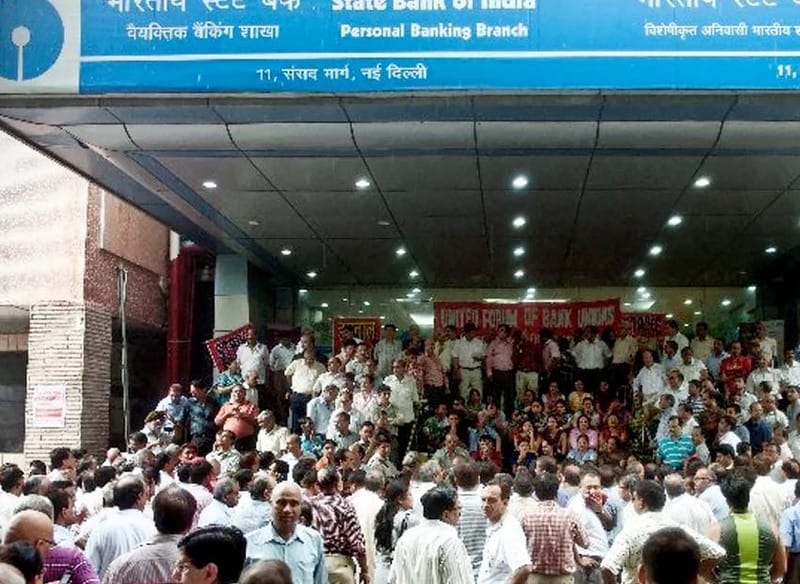 Nearly 50,000 employees of five associate banks of State Bank of India have gone on a day-long nationwide strike today to protest the proposed merger with their parent bank.

The employees of all the associate banks of SBI are protesting under the banner of All India Bank Employees Association.

“We are protesting against the plan of SBI management to merge 5 large associate banks into it,” a statement issued by the union said.

SBI management’s arrogant and high handedness approach has forced employees of all five associate banks of SBI, affiliated to All India Bank Employees Association, to protest against forceful closure and take over of associate banks by SBI.

The employees will also stage a demonstration against the proposal at Azad Maidan here today.

Notably, the Board of Directors of SBI had on Tuesday discussed the possibility of acquiring its associate banks, including assets and liabilities.

“This discussion is purely exploratory at this stage and not certain. A proposal seeking an in-principle approval to start negotiations with associate banks will be submitted to the central government,” SBI had said after the board meeting.

Besides, the SBI management also proposed to merge the first women-oriented ‘Bharatiya Mahila Bank’ with it. SBI has sought government approval for the proposed plan. Yesterday, another union, All India Bank Officers’ Association, had requested the government not to give consent to the SBI’s plan of merger.

Some Lesser Known Facts About The Iconic ‘Vontimitta Kodandarama’ Temple In...