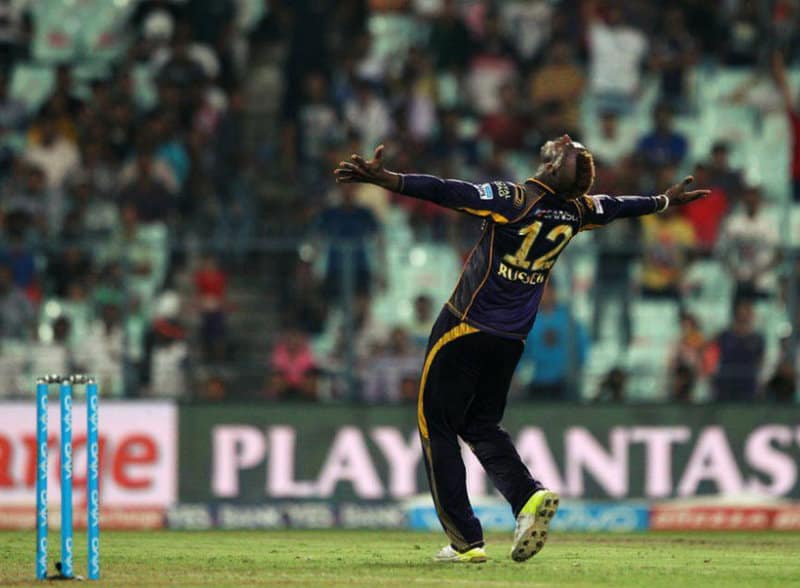 Kings XI Punjab surprised everyone by fielding just three overseas players. With an injury to Shaun Marsh, they had the option to play Hashim Amla, who landed in Kolkata on the day of the game, or Farhaan Behardien. Instead, they fielded Marcus Stoinis, Glenn Maxwell and David Miller and became the first team to do so since 2012 – when Mumbai Indians fielded only three overseas against King XI in Mumbai.

Whether the lack of the fourth overseas player cost them the game is something worth contemplating but, on the night, the batsmen failed to turn up as the team succumbed to a seven-run loss, chasing 165, against Kolkata Knight Riders at the Eden Gardens in the Indian Premier League game. Andre Russell was the star for the hosts with superb figures of 4 for 20 and a handy cameo (16 off 10) with the bat.

On a pitch where the bowlers managed to get the ball to move around, the Knight Riders’ opening bowling duo of Andre Russell and Morne Morkel managed to extract extra bounce to dent the Kings XI top-order. The visitors were soon reduced to 13 for 3 with the top 3 – Murali Vijay, Stoinis and Manan Vohra – all dismissed for single digit scores and the team in need of Maxwell and Miller to come good if they were to chase down Knight Riders’ score.

In a tournament where 22 out of the 32 games so far have been won by the side chasing, Kings XI fluffed their opportunity as the openers failed to set up a solid platform for the middle-order to follow.

Normalcy was restored soon after as Maxwell (68 off 42) started freeing his arms to get the runs flowing. On the eve of the match, Maxwell practiced his range hitting to the net bowlers on one of the adjacent wickets to size up the boundary length towards long-on and long-off. He peppered the straight boundary on more than one occasion to keep Kings XI Punjab on track in the chase.

Miller survived a close call in the 10th over when a ball from Brad Hogg clipped the bails but failed to get it off the groove. He along with a marauding Maxwell added 67 runs for the fifth wicket before a googly from Piyush Chawla (2 for 27) managed to beat Maxwell’s blade while he was trying a reverse sweep and trap him in front.

One an iconic player and the other, an iconic actor. We welcome @iamsrk and @SGanguly99 to Eden. #AmiKKR #KKRvKXIP pic.twitter.com/Bg2kez7dX6

The visitors needed 45 off 26 at that point. Maxwell’s wicket sucked the momentum out of their innings and the situation worsened when Miller’s luck ran out. He was caught off a full toss from Andre Russell in the 18th over.

The last time Kings XI Punjab won two consecutive matches was in 2014. There could have been an unexpected repeat as Axar Patel hammered a seven-ball 21 to take the game towards a tense finish. Kings XI Punjab, however, finally ran out of steam and fell seven short.

Earlier, Gautam Gambhir and Robin Uthappa shared 101 runs for the first wicket to ensure Knight Riders got off to the perfect start. The stand not only laid the perfect platform for the middle-order to lift off, it also showed the prefect sync between Gambhir and Uthappa. Kolkata havent made any changes to their opening duo since 2014 and the understanding between the pair was evident.

There were several instances where both Uthappa and Gambhir ran singles that could have resulted in an easy run out had there been not understanding between the two. Instead, both managed to sneak every possible run to put the Kings XI fielders under pressure. The first seven overs yielded just 43 runs, but their openers were well settled and in the groove to up the ante. The next four over leaked 40.

While there weren’t any audacious strokes, they added 101 runs in 13.3 overs before the captain was run out. He had made a handy contribution of 54 off 45.

The one thing stood out in Uthappa’s innings of 70 off 49 balls was that he never lost shape while tonking the ball over the rope. However, his innings could well have been cut short if Mohit Sharma had managed to pouch an easy chance offered to him at long-on in the 14th over when the batsman was on 52.

Kolkata continued to rejig their batting order and sent in Yusuf Pathan at No. 3. The Pathan-Uthappa collaboration fetched Knight Riders 36 runs in 3.2 overs before the latter was run out trying to sneak a non-existent single. The wicket meant Andre Russell joined Pathan in the middle but they weren’t allowed to tee off courtesy some terrific death bowling from Mohit and Sandeep Sharma. The execution of yorkers couldn’t have been more perfect and that even pegged down Russell, who managed 16 off 10.

The bowlers’ effort at the death went in vain as the hosts sneaked to a win and to toppled Kolkata Knight Riders to take first place on the points table.