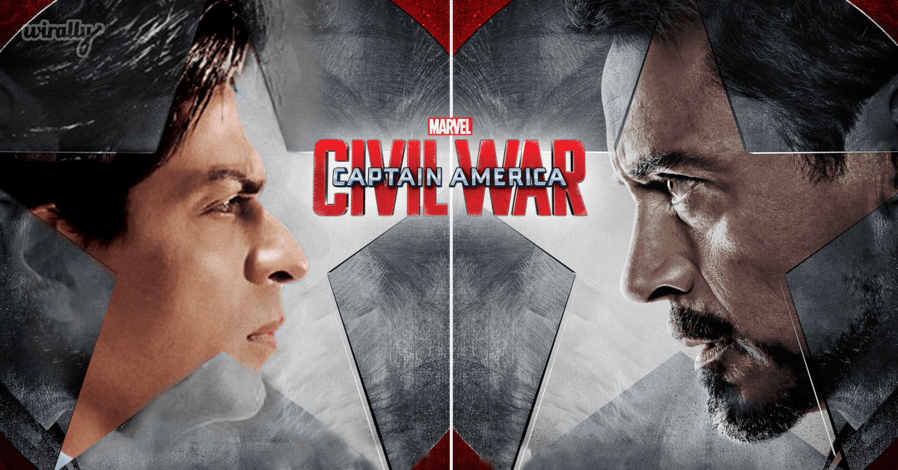 With the latest inclusion of Varun Dhawan into the voice cast of Captain America : Civil War, The superhero franchise opened up doors for many more possibilities in the spectrum of casting and voice influx. That got us thinking, and we came up with these wonderfully apt voice casting for the remaining of Team Cap and Team IronMan. Even if the movie is remade into Indian sensibilities, wouldn’t these actors actually nail it. Do let us know your thoughts on it…

Billionaire, philanthropist, Playboy, Incessant Charmer, Smooth Talker and Edgy persona. There can’t be many actors in the world, let alone India, to match up-to Robert Downey Jr’s level of commitment to this character. And with the latest Gaurav act, SRK is the perfect match for such power acting. Jabra Much? He’s Rich, He’s Handsome, And He’s Versatile as any star can be. Shahid Kapoor is all this an more, and is perfectly poised to play the prince of Wakanda, Black Panther. Ranveer Singh As The Iron Patriot :

Don’t hit us yet, We’ve got an explanation to it. Look, His schedule is super busy these days, and even if we did approach him for this mega movie, he’d probably allocate us around 3 days. And considering Iron Patriot isn’t appearing all through the movie….Win-Win..! Elusive, Fiesty, Confident and Powerful, Who else than our own Quantico Actress to take up the mantle of Black Widow. Did you guys see a commonality both these actress share? No? Well they’ve already voice casted for a same role this year……Kaa In The Jungle Book.

Hrithik Roshan As The Vision :

Killer monjo looks, Greek God facecuts, An ability to emote beyond the obvious by the mere motion of his eyes, Hrithik is A Vision already..! Oh before we forget, Look at those eyes…Aren’t they eerily similar? The Tamasha star is at his impressive best when he is subtle, upright and bent on a mission. It could well be an interesting take, if we had him play a super soldier for once. And we did the math…Captain America and Ranbir Kapoor have a 90 percent physique match. Dope. Deranged, Out Of His Time, Confused, And Angry. We were actually talking about Bucky. But since you already got the idea, let’s dance. Oh and one more reason, Bucky and Cap are the best buddies, Much like Aditya and Ranbir are. Balam Pichkari stuff..! Soon to MS Dhoni, again has some date issues going on, with the biopic and Befikhre coming up, hence we thought, we should probably have him on board for a few shots and aim high. Look Closely, Have You noticed a certain resemblance. No? Fine…I’ll explain. Both are super cute yet utterly dangerous. Baaghi trailers if you will. Simmering strength, unsure capabilities and oodles of cuteness, maketh Scarlett Witch. Now we couldn’t find any one to play Falcon ( before you point that out ), and so we are looking for suggestions. Please let us know in the comments below. And Before We Forget…

India Ki Shaan, Sultan Khan as the SpiderMan to deliver the last punch of this presentation. Because we love him so much that this writer wants Bhai in everything.