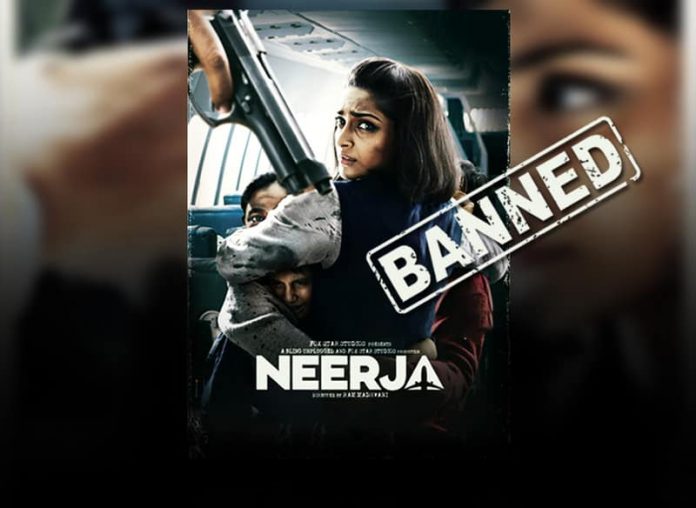 India and Pakistan had/have similarities and dissimilarities in many aspects. One of the similar part comes by the film making and publishing. Indians and Pakistanis are like the classic Bollywood twins with some slight differences. They were brought up in very different environments, leading them to have very different sensibilities, contrasting likes and opposite dislikes.

Wonder what will happen when the siblings finally face each other? Utter chaos! But at some aspects there is always a clash between the films of India and Pakistan so we have handpicked few Bollywood films which Pakistan banned for a variety of reasons: 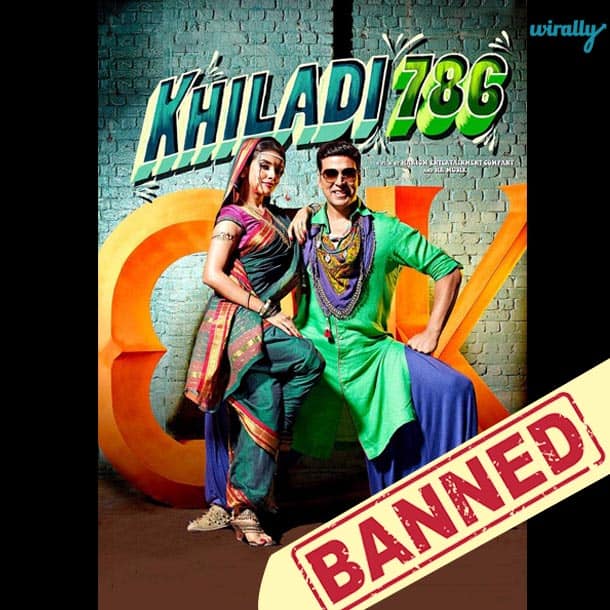 Akshay Kumar may be the one of the leading actor of Bollywood but Pakistan wouldn’t buy his movie KHILADI 786 especially if presented with number ‘786’. So when Khiladi 786’s poster was launched in Pakistan, it immediately led to banning the film because of the religious significance of numerals ‘786’ among Muslims. Considered very sacred to Islam, the usage of the number in a comedy film was deemed to be hurtful for Islamic sentiments and therefore led to a ban on the promo and eventually the complete film got scrapped in Pakistan. 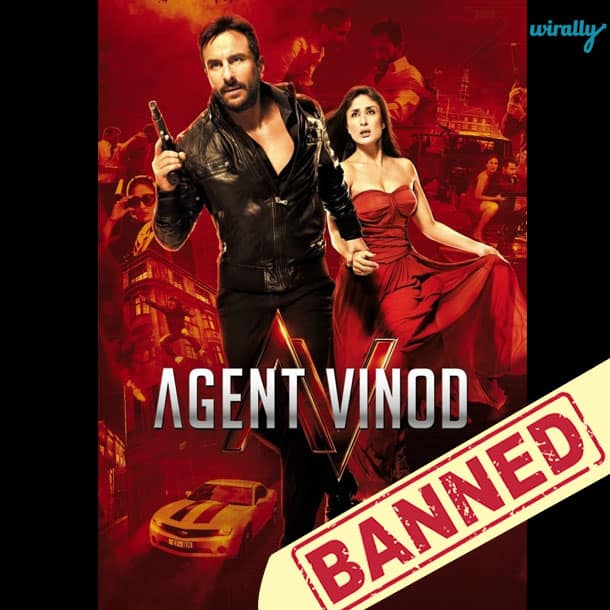 The fact that Agent Vinod tanked without a trace in India is a different story but the Saif Ali Khan spy film didn’t even get to come out in Pakistan. Agent Vinod got banned just days before its scheduled release because of its plot where Pakistan ISIS team as the anti social element in INDIA. The main reason on banning this movie was that the film pictured that the people of Pakistan organisations supported a nuclear strike in Delh. No wonder, a ban was always in the calling. 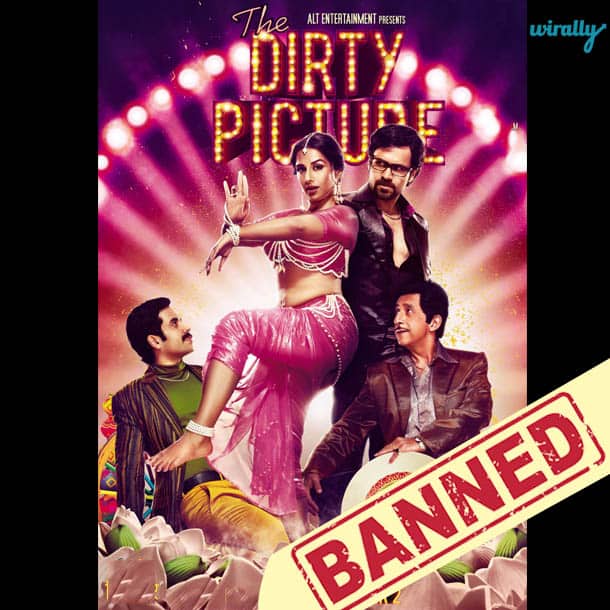 DIRTY PICTURE – the name of movie made itself banned in Pakistan. If a movie releases with an ‘A’ certificate in India, chances are high the same movie might not see the light of the day in Pakistan, ever. So when Vidya Balan plotted as Indian actress Silk Smitha in This Dirty Picture, it was too much to handle for the Pakistani censor board and the movie was outrightly termed bold and vulgar and got banned in Pakistan. 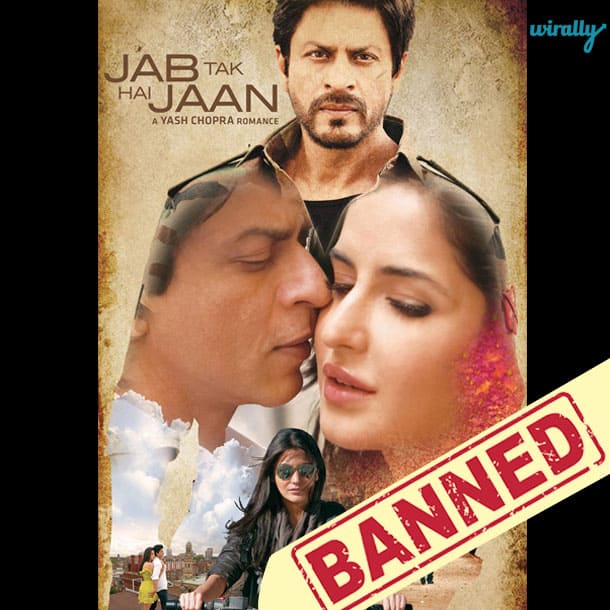 Jab Tak Hai Jaan saw Shah Rukh Khan play an army officer in the Indian Army’s bomb disposal squad. And where there is Indian army in a Bollywood movie, trouble is not far away in Pakistan. The Yash Chopra film was snapped off in Pakistan as soon as the trailers hit the TV screens. The movie got banned owing to certain dialogues which hinted at the Pak army. However, it took Yash Chopra to use some clout to finally make his movie see the light of day in Pakistan. 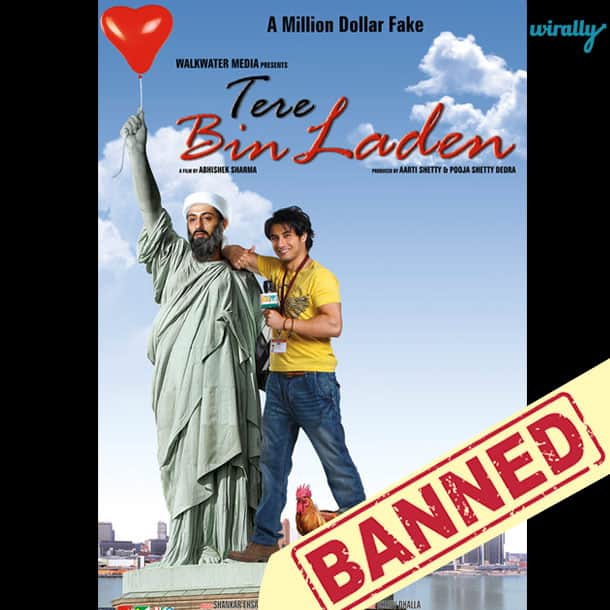 The name itself expalins that it is releated to the one of the most known person OSAMA BIN LADEN. Pakistan banned a Bollywood movie starring their own export to India, singer-actor Ali Zafar. Tere Bin Laden was banned in Pakistan because it showed up with the controversial issue of slain Al-Qaeda head Osama Bin Laden and hit them where it hurts the most.

The light-hearted movie was accused of containing vulgar and objectionable dialogues, abuses and derogatory remarks and was also labelled as anti-law enforcing agencies of Pakistan. The censor board in Pakistan felt that the movie could give extremists a false idea and could lead to riots and attacks, hence the movie was banned in Pakistan. 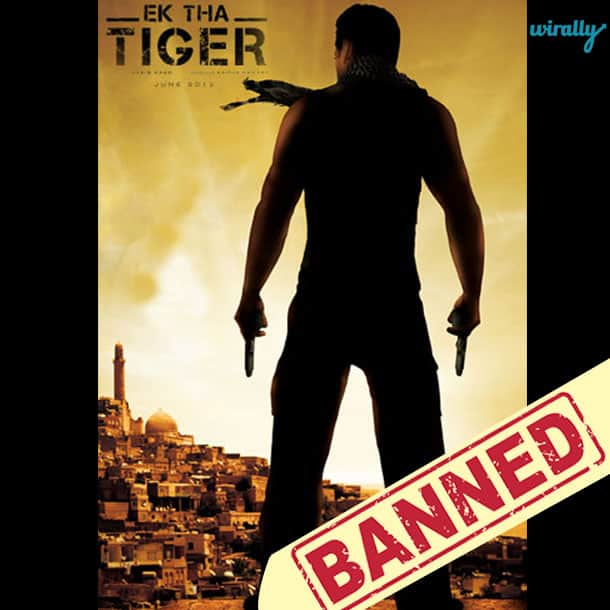 Another Eid release to court trouble in Pakistan was Ek Tha Tiger. The plot of the movie dealt with altercations between the intelligence agencies of India and Pakistan i.e RAW and ISI respectively. No wonder, the Salman Khan and Katrina Kaif-starrer spy flick was declared to not to be promoted or published in PAKISTAN. Elaborating on the issue, the vice-chairman of the Pakistan censor board, Muhammed Ashraf Gondal said, “We have a strict criteria due to which films that have themes that touch on anti-terrorism and are against Pakistan’s national institutions or security agencies ultimately have to be censored because they are against the national interest.” 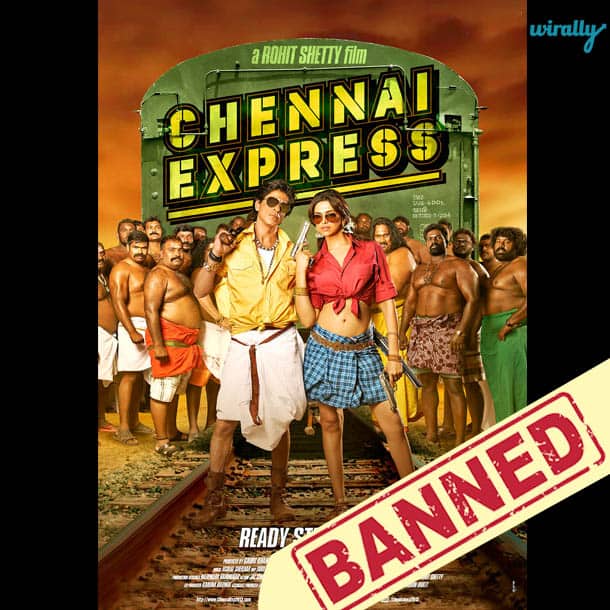 Shah Rukh Khan might rule the hearts of people in the kingdom across the border, but that didn’t stop distributors and exhibitors in Pakistan from banning his latest train ride, Chennai Express to halt at any station in Pakistan. Shah Rukh’s movie was scheduled to release on the festival of Eid along with 4 Pakistani films – Josh, Ishq Khuda, War and Mera Naam Afridi. However, keeping the interest of Lollywood in mind, the movie was banned from releasing on Eid and was scheduled for a different date of release. 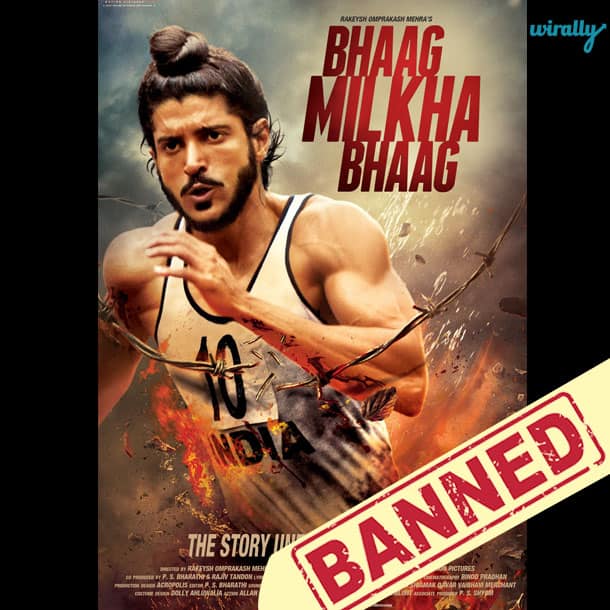 Bhaag Milkha Bhaag is an inspiring tale of a common man who rises above all odds to fulfill his dreams and goes on to be known as the ‘Flying Sikh of India’. So far, so good. However, what didn’t go down well with the censor board in Pakistan was that the movie allegedly ‘does not portray Pakistan in good light’, as it travels through the troubled past of India-Pakistan partition. Lollywood also had an issue with the trailer of the movie featuring the dialogue: ‘ Mujhse nahin hoga. Main Pakistan nahin jaaunga ‘, which ultimately led to the banning of the film 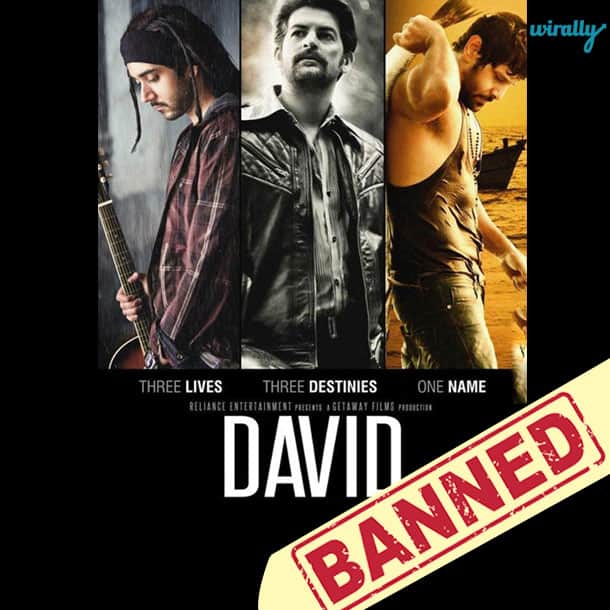 Bejoy Nambiar is known for his dark cinematic narratives like Shaitan , however it was David which caused problems across the border due to its controversial content . Like India, Pakistan too has some basic criteria for movies to fulfill at which David Failed‘. Justifying the ban on the film, the chairman of the Central Board of Film Censors of Pakistan, Rai Akbar added, “There were several issues with the film but our main point was that the film was not suitable for viewing in Pakistan.” 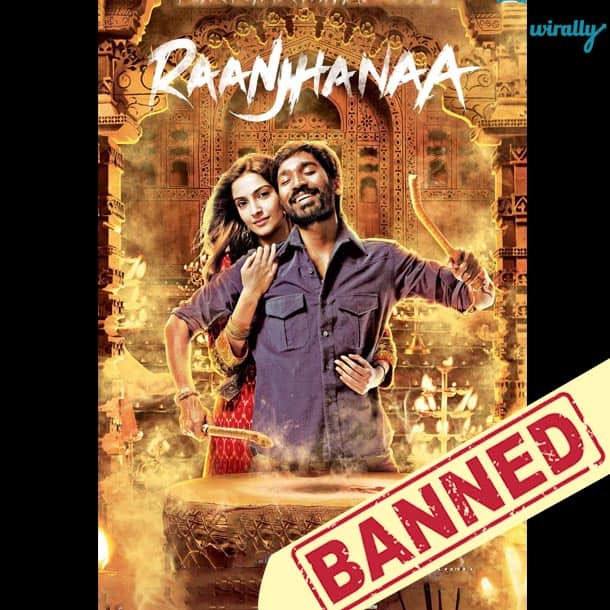 The most surprising entry into the list of banned Bollywood movies would easily be Raanjhanaa. The movie which narrates the journey of one sided love of a Hindu boy in pursuit of a Muslim girl, could not impress the censor board in Pakistan.The reason which the movie got banned would be silly but its true. The movie worked well in India, but Pakistan had issues with the treatment of Sonam’s character (a Muslim) who falls in love with two Hindu guys and hence got the film to be banned all across Pakistan. The censor board felt that the film was against the rights of religion in Pakistan and would rise to a protest. 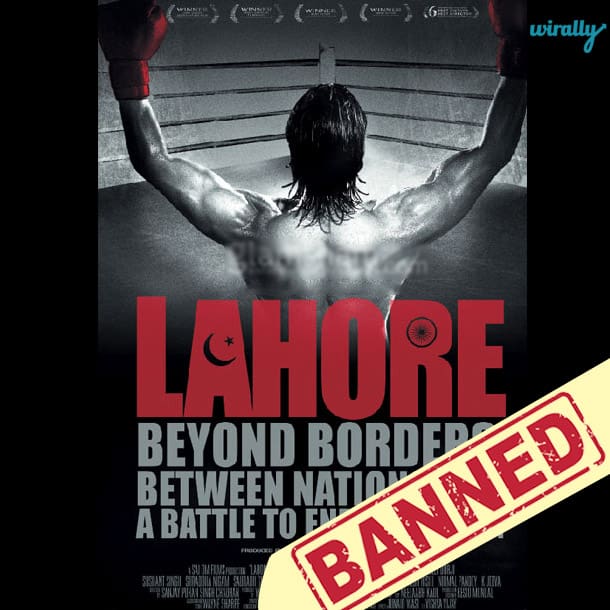 Whenever India and Pakistan meet in a sports battle, sparks are bound to fly. Lahore dealt with the political rivalry of India-Pakistan and made an effort to make the two countries bond in the kickboxing arena. However, the Pakistani censor board could not digest some scenes and dialogues in Sanjay Puran Chauhan’s film and decided to ban the movie altogether in Pakistan. 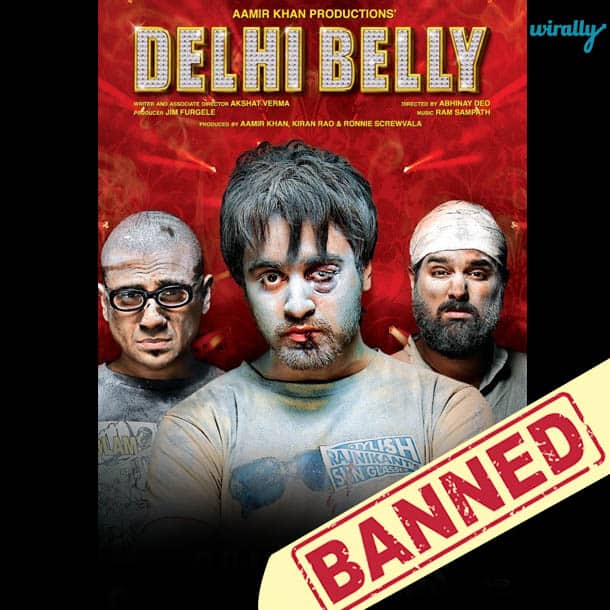 Delly Belly is a 2011 Indian black comedy film written by Akshat Verma and directed by Abhinay Deo. It stars Imran Khan, Kunaal Roy Kapur, Vir Das, Poorna Jagannathan and Shenaz Treasurywala. While the original version was in English. this movie was unable to make the view in front of Pakistanis because too adult language and censor board of pakistan 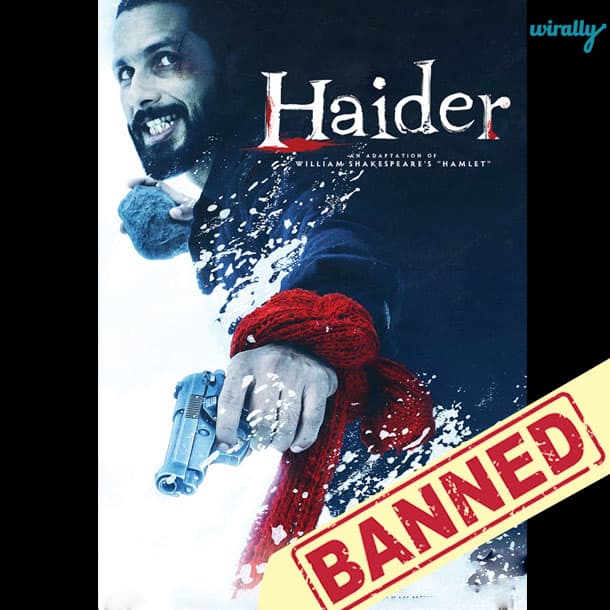 One of the top film of India of genre crime and drama based on SHAKESPEARE HAMLET just modified into Indian theme reflecting the Kashmiri conflicts between India and Pakistan. As there are few scenes which includes the cruel activities in Pakistan, so the movie was unable to screen in Pakistan. The movie was able to get high regards and number of awards for the story and lineup but unable to show its power in Pakistan field. 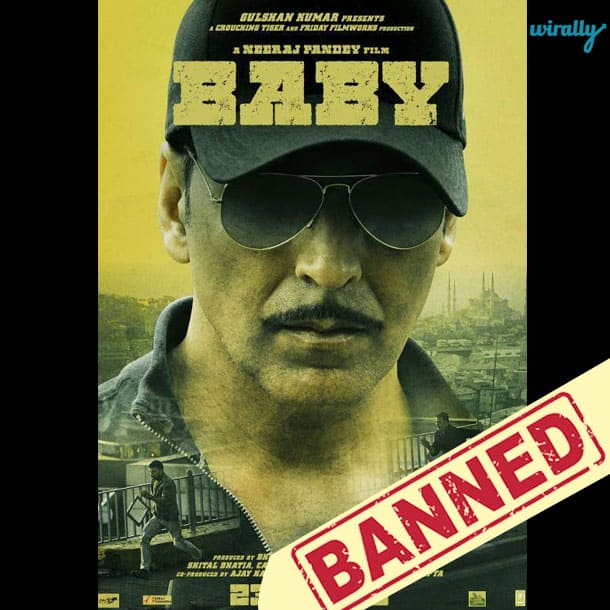 Once again Akshay kumar’s Spy Action thriller film in 2015 which reflects about the fictitious team of fighters for the response of Mumbai Attacks was just blocked its way to make its mark on Pakistan film lovers. This movie is directed by Neeraj pandey in which there are few anti-elements regarding the negative part in Pakistan. 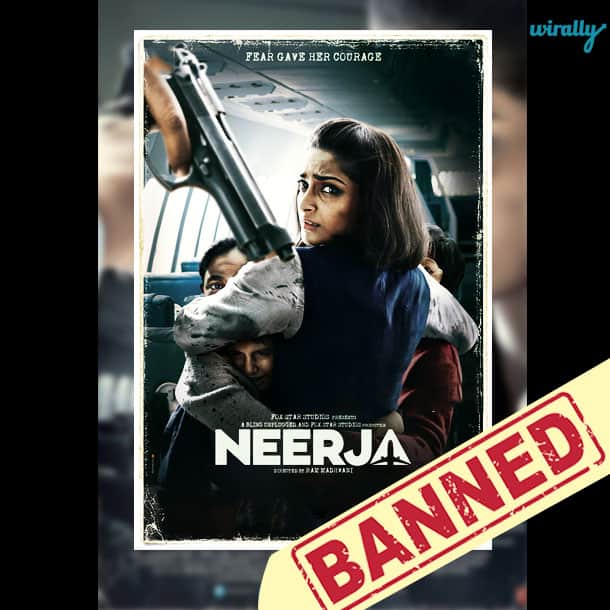 The latest inclusion into this list is real incidents during the hijacking of the Pan Am Flight 73 at the Karachi airport in 1986. The film has been banned even before it was submitted to the censor board. The film that revolves around a Air Hostess being shot by terrorist was initially approved to by the Ministry of Commerce to import the film, but has now changed the decision.

So the Pakistan censor board restricted the release of film in the country.