Facebook’s messaging app let’s you do more than just chat with your friends. You can trade GIFs, stickers, and photos. And create groups and forward texts. But most people don’t know about a new feature, a backdoor silent inclusion rather. That of a very playable (but pretty mundane looking) Chess Game!!

It is a little clunky, but hey you don’t need a third party application to run it. Infact, the pawns can be moved within the chat window itself. And we are telling you how to do that (and it’s totally command based, which , at some point of time, is sure to give you the whole matrix slurp)

To start the game, enter the command in your chat and press send :

And to move your pieces, this is what you need to do:

The command starts the same as the previous, ergo, @fbchess and then if you have to move a pawn to, say e4, type in @fbchess Pe4 (or simply @fbchess e4, exclusively for pawn)

Now to move a different warrior on the board, you would need to go with these notions

K is for king, Q for queen, B for bishop, N for knight, R for rook and P is for pawn.

Now say, you want to move the rook to d3, you say @fbchess Rd3. And if you need help, the command is pretty straightforward, @fbchess help. And the rest I’m sure, you’ll figure out.

Sure, this isn’t the best-looking or most sophisticated method to keep yourself entertained or play chess, but it’ll work. Besides, just think how much fun it will be to send a series of Facebook stickers to your opponent as you yell “checkmate” into a computer screen. What a crazy time to be alive. 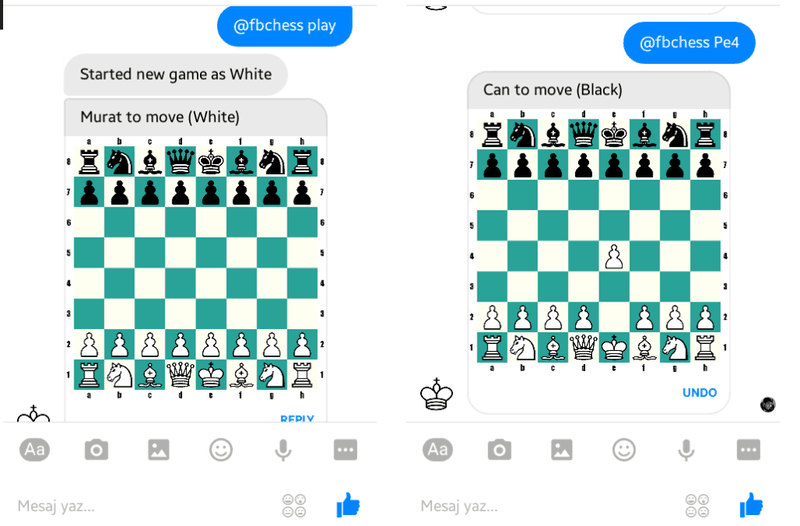