The RIL Chairman and the richest man in India. He is considered as one of the world’s most successful businessmen. Mukehs Dhirubhai Ambani continued the journey his father started and definitely rose up to his father’s expectations. Son of a legendary businessman who carved his own path from a very modest living, Mukesh looked up to his father and was highly ambitious as a kid. He is an innovator and a high risk taker.

His enterprise JIo is an example for this. The company single handedly took over the telecom industry today and is very close to eliminating all of the major competitors. In his time, the reliance empire expanded like no one ever expected. He is a mix of true entrepreneurship expertise and conventional business acumen. A rare combination in Indian history. His enthusiasm to never stop growing is truly inspirational. The billionaire business magnate believes in one theory staunchly, “Growth is a way of life and we have to grow at all times”.

Well, this gives us a fairly good image of his unquenchable thirst for success but we must also know all the time he chose to try again and again until he got it right! Back in 2007, he became the world’s richest man for a brief period. This was the time when the share market was on the boom and the capitalisation of a private enterprise was encouraged. All economists predicted that he would regain the position soon. We all are looking forward to it.

Born and educated in Mumbai, then Bombay, he dropped out of the MBA program at Stanford. HIs father had just got a license to produce polyester. In order to help his father in his business, Mukesh Ambani flew back to India. They further became very active in textiles, petrochemicals and oil, gas exploration and production. The grass roots petrochemical factory in Jamnagar has one of the most advanced manufacturing and technological capability. He always believed in his own capability and never succumbed to any pressure, be it in terms of competition or legal. 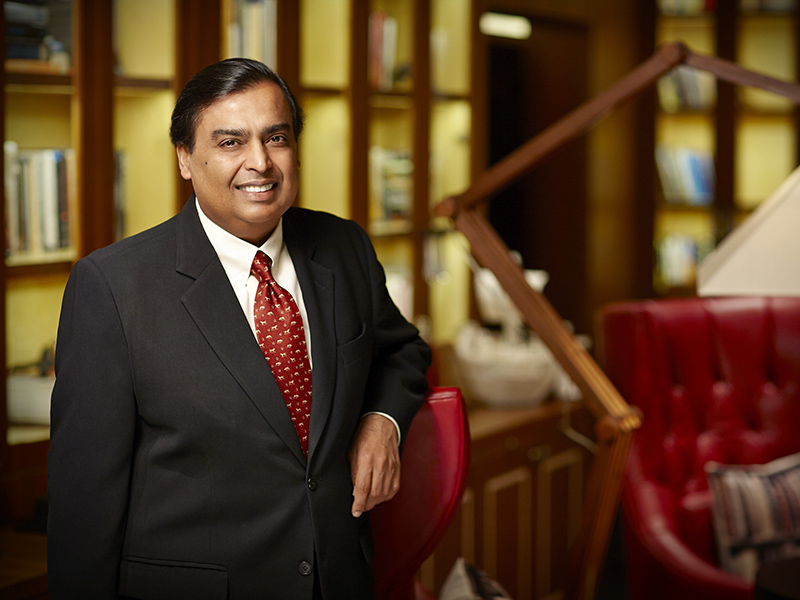 He is a futurist in its true sense. He was able to see the boom of telecommunications and the internet. When he first launched Jio providing data for almost free of cost, everybody was expecting it to turn into a disaster. The market share and acceptance that Jio gained was mostly due to this brilliant marketing plan. The slow transformation from unpaid to paid date packages, people were not feeling that Jio was lotting them. Data was affordable to everyone. Reliance also rented mobile towers from BSNL and MTNL to give Jio uninterrupted network reach. The release of affordable mobile phones by Jio further increased their market share. The launch of Jio was like a storm and it completely took its competitors, market and consumers by surprise. The futurist vision and the fundamental of inclusiveness helped Ambani in his endeavour.

He also holds honorary and active positions in institutions and councils. He is one of the board of Directors for Bank of America and an advisory member for the Council of Foriegn relations. The number of accolades are a testimony to his passion for excellence. He has expanded to various arenas.

Reliance retail remains the largest retailer in India and their online shopping platform Ajio, is one of the most chosen one among Urban youth. It is not a wonder that he has been in Forbes list of top ten richest people in the world continuously. Presentaly, he is the richest man in Asia and 5th richest in the entire world. Google recently invested 4 billion into Jio platforms which was a real turn in Indian business history.

This deal sets a stage for further growth and innovation in India’s mobile market. Smart phones are going to be of superior quality while ensuring that affordability is still maintained.

Ambani is also highly brave when it comes to business decisions. He was just 24 years old when the Patalganga petrochemical project was assigned to him. After his father’s stroke,Mukesh Ambani alone had to manage the entire Reliance empire not to mention a major construction project which could have a huge impact on him.However, he rose up to the occasion and carried it out, showing the world- the new face of Indian businessman who is innovative and highly entrepreneurial.

Key takeaways from his life? Strive for growth and excellence continuously. Be an innovator and a futurist above all and maintain relationships. Ambani is all in all a proud Mumbaikar. He credits the city to his growth. He always believes that anyone can be the next Ambani. His life proves that grit and determination despite roadblocks will always gain you fruitful result.