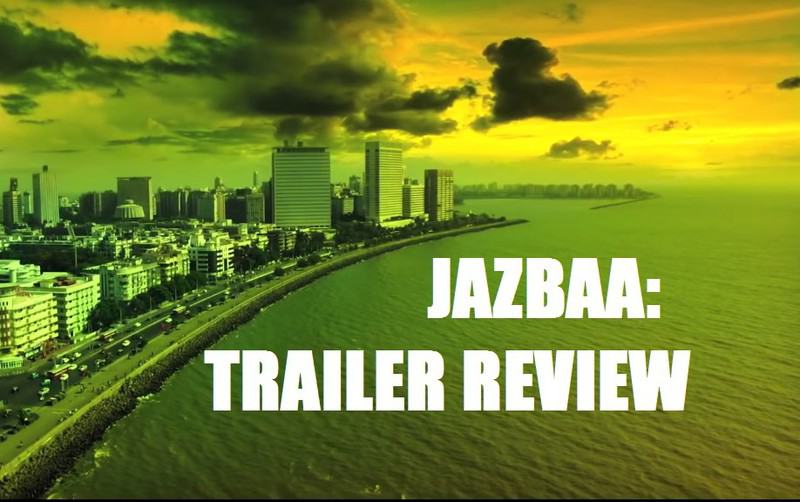 Sanjay Gupta is India’s King of Rip Off.

He has built a career from ripping off Hollywood and Korean hits – Kaante (Reservoir Dogs), Zinda (Old Boy), and Musafir (U Turn). So obviously, a Sanjay Gupta film is not really high on originality, so I wasn’t looking for that.

The second aspect of his films is the stylized cinematography, which is something he deserves credit for. All his films have unique styling, be it Zinda, Kaante, or even Jazbaa.

The film has been in the news for a long time now, touted as Aishwarya Rai’s comeback vehicle. So how does it fare?

The trailer begins with a green-tinted shot of Mumbai, as with all of Sanjay Gupta’s films. Within a few seconds, the context is set, we know the plot, and what it is about.

Which then brings us to the biggest draw of the film – Aishwarya Rai Bachchan.

Her eyes have gotten greener (or perhaps it’s the green filter that the film uses), and her expressions wider. Sadly, the dialogues come across as pretty lame. Watch as she says, ‘Kya bakwaas kar rahe ho?’, or ‘Yeh case ek maa handle kar rahi hai’, and they sound like dialogues from a high school play.

Sadly, the trailer evokes no special interest in the film. The most surprising bit, however, was Sanjay Gupta’s credits in the end, as ‘Writer’. Really?? Even the trailer is similar to the Korean film Seven Days.

Recalling The Greatest Movies Of Legendary K. Viswanath Garu Which Are Actually A Gift To Us

Jagadam to Ismart: Ram Pothineni’s Hindi Dubbed Movies Which Are On A Rampage On Youtube

We are movie buffs and we are proud of it!

Child Artists who have definitely grown up now!

Everything You Need to Know about Rakesh Maria