A day after shutting down ‘Free Basics’ scheme in India, Facebook’s India head Kirthiga Reddy quits. Reddy is stepping down from the post to return to the US.

Facebook India managing director of nearly six years, Kirthiga Reddy is relocating to the US in the next 6-12 months due to personal reasons, she said in a Facebook post.

“When my family relocated to India, we knew that we would move back to the US someday. It’s a bittersweet moment to share that the return timeframe is coming up in the next 6-12 months. Our two daughters start high school and middle school this coming year— which serves as a natural transition point to make this move back,” said Reddy, who was the first Facebook employee in India. 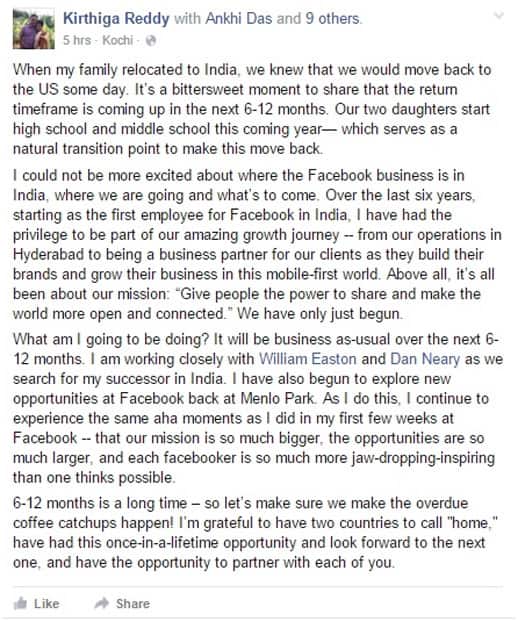 Facebook was at the Centre of a controversy surrounding its Free Basics platform in India, in the recently concluded consultation on differential pricing of data services.

Facebook India did not immediately answer an email about whether Reddy’s exit was linked to the controversy.

In a very public debate that lasted nearly two months, Facebook tried to push for its Free Basics program that aims to provide free Internet access to certain apps and websites registered on its platform by striking a partnership with a telecom operator. Facebook was accused of abusing its market dominance to swing the debate in its favor, especially after it launched a massive advertising campaign in India which is said to have cost the company over Rs. 150 crore.

The Telecom regulator on Monday barred all forms of differential pricing except in the case of emergency services, putting an end to Free Basics in India, and the social network withdrew the programme from India on Thursday.

She further added that she will be working closely with William Easton and Dan Neary to find a successor for her.

“As I do this, I continue to experience the same aha moments as I did in my first few weeks at Facebook — that our mission is so much bigger, the opportunities are so much larger, and each facebooker is so much more jaw-dropping-inspiring than one thinks possible,” she added.