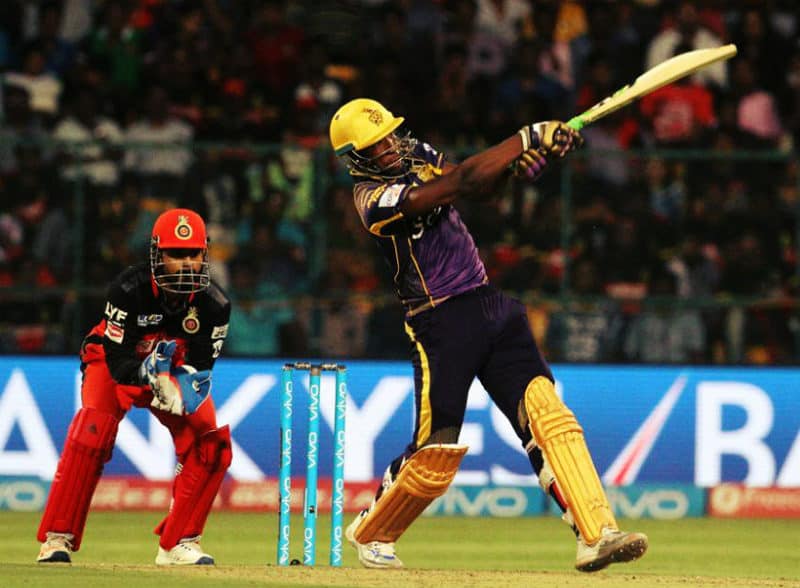 Pathan blazed away to 60 off 29 balls to help KKR achieve the target of 186 with five balls to spare at the M Chinnaswamy Stadium.

Andre Russell made 39 off 24 balls in a brilliant match-turning fifth-wicket partnership of 96 runs in just 7.2 overs.

The Knight Riders were back to the second position in the points table, while RCB’s hopes of qualifying for the playoffs took a beating.

Sent into bat, Royal Challengers Bangalore scored 185 for seven. In reply, KKR were reeling at 69 for four in the 11th over. However, the duo of Pathan and Russell had other ideas and made short work of the chase by launching a severe onslaught on the RCB bowlers.

Pathan smashed six boundaries and three sixes, while Russell cleared the fence four times. Joining force at a difficult situation, Pathan and Russell kept their side in the game till the Indian brought KKR within sniffing distance by hitting Shane Watson for 24 runs in the 17th over. Pathan then collected 16 runs off Tabraiz Shamsi in the 19th over.

The Knight Riders were off to a poor start, losing Robin Uthappa in the first over bowled by Stuart Binny. The next batsman, Chris Lynn threatened with a six, but got out after making 15.

Skipper Gautam Gambhir, the side’s in-form batsman, appeared to be once again shouldering the responsibility of guiding his team, but he too fell after reaching 37 off 29 balls with the help of four boundaries and a six.

When Gambhir was walking back to the dugout after being trapped by a full-length delivery from Sreenath Aravind, KKR were struggling at 66 for three, and the situation got worse when Manish Pandey was dismissed by Watson three runs later.

A partnership ensued between Russell and Pathan as KKR needed 119 runs in the last 10 overs. The West Indian, particularly, was severe on Shamsi who was hit for 18 runs.

Russell hit the slow left-arm spinner for two sixes and a four to up the ante.

KKR accumulated 16 runs in the next over bowled by Varun Aaron. Coming in to bowl the 17th over, Watson was smashed for four boundaries and a six to help KKR close in on the target.

Leg-spinner Yuzvendra Chahal (2/27) gave RCB the much-needed breakthrough, removing Russell in the 18th over, but Pathan continued his assault and guided his team home.

Binny smashed two sixes and a boundary in the last over while facing only four balls. Umesh Yadav, who was allowed to continue despite bowling two beamers, was hit for 20 runs in the last over and finished with expensive figures of 1/56 in four overs. Umesh gave away 23 runs in the 18th over, which turned things around for RCB.

Sent into bat after the coin landed in favour of KKR captain Gambhir, Royal Challengers Bangalore rode on a 84-run second wicket partnership between Kohli and Rahul.

Royal Challengers Bangalore were dealt a blow as Chris Gayle, playing in his first game since returning from the West Indies after the birth of his daughter, gave away his wicket by going for an extravagant shot against Morne Morkel.

The South African pace ace got a bit of extra bounce that unsettled Gayle who mistimed a pull shot to give an easy catch to wicketkeeper Robin Uthappa. Just before getting out, Gayle hit Morkel straight down the ground for a six.

Kohli and Rahul then got together to steady the innings by playing sensibly. Rahul hit Piyush Chawla and Sunil Narine for sixes, while Kohli preferred to play along the ground.

However, while trying to shift gears and accelerate the run rate, Rahul got out to Chawla in the 12th over with RCB at 92 for two.

A B de Villiers (4) failed to get going as he was trapped by Chawla. Kohli, who got a reprieve when Gambhir dropped a sitter off the bowling of Morkel, got out in the very next ball while trying to force the pace.

Hence KKR won the match by 5 wickets with 5 balls despair in the end…!