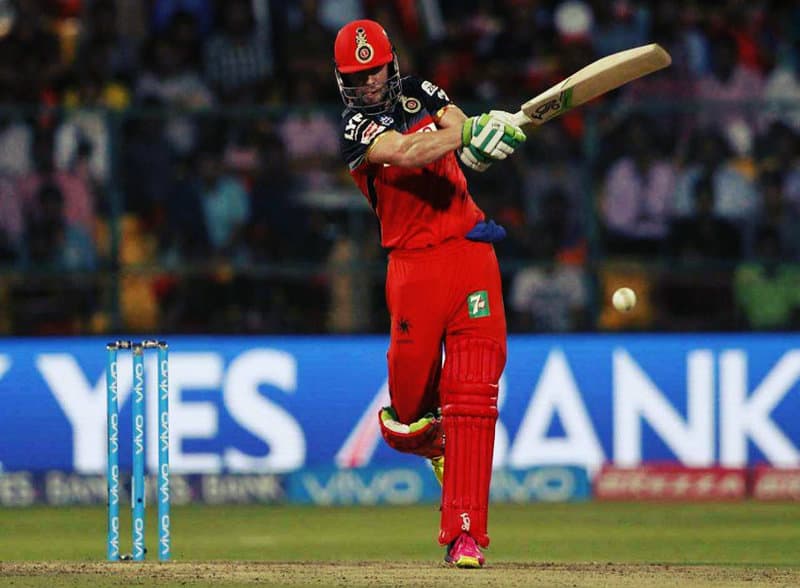 AB de Villiers (79 * off 47 balls) led a spectacular fight and pulled Royal Challengers Bangalore out of one of the deepest burrows to power his side to the final of the Indian Premier League, 2016. Gujarat Lions failed to make good on Dhawal Kulkarni’s perfectly-laid foundation as Royal Challengers recorded a four-wicket win in the first qualifier at the M Chinnaswamy Stadium on Monday (May 24), despite losing half their side inside the first 10 overs in their chase.

After a string of indifferent performances throughout the season, Royal Challengers Bangalore’s bowling attack stood vindicated as they managed to execute Virat Kohli’s plans to perfection in the powerplay overs. Having won the toss and asking Gujarat Lions to bat first on a fine batting strip, Kohli deployed attacking fields, and kept his players on their toes. He constantly moved his fielders around, ensuring they cut the angles and deny batsmen easy singles. In perhaps their worst start to a game, Gujarat Lions lost both openers – Brendon McCullum and Aaron Finch – in the second over, off tweaker, Iqbal Abdulla.

With odds stacked against us we still broke through to the final! Cricket of the finest standards! #GLvRCB #PlayBold pic.twitter.com/OTCKTDzQ3j

The track at the M Chinnaswamy stadium was, uncharacteristically, on the slower side, and that put the bowlers at an advantage. Finch and McCullum could only manage to catch thin air with their wild swipes in the first over off Sreenath Aravind that went for just two runs. With a spinner coming on from the other end, McCullum took the initiative of finding the boundary and danced down the track, but could only slice the ball to AB de Villiers at long off. Royal Challengers knew they’d struck gold early and it showed in their celebrations. Finch added a four to his tally but fell soon after as he tried to guide a length ball down the leg side but was undone by considerable amount of turn. The outside edge went straight to Chris Gayle at first slip.

Kohli experimented by having his two fielders outside the 30-yard circle stationed at deep square leg and point, as opposed to the traditional practice of placing them at third man and fine leg. Such a setup helped Royal Challengers fox Suresh Raina, one of the most seasoned campaigners in this stage of the tournament. With deep square leg in place, Raina was invited to pull a short delivery in the fine leg region. His attempt however, wasn’t strong enough to beat Aravind at short fine leg, reducing Lions to 9 for 3 in the fourth over. Royal Challengers’ early efforts on the field shattered Lions’ reputation of being a dominant force in the powerplay overs as Dinesh Karthik and Dwayne Smith helped them crawl to 23 for 3, the third-worst team tally in first six overs in this year’s IPL.

Once the field spread out and the aggression on the field somewhat relented, Smith decided to cut loose, taking a particular liking for the spinners. Yuzvendra Chahal erred a bit in his length and was taken to the cleaners by Smith. Abdulla, who gave Royal Challengers a jump start, was not spared in his last two overs, conceding 38 in his four overs. Karthik, meanwhile, did well to stand tall at the other end, allowing Smith to build the Lions’ essay, brick by brick. In a 61-ball stand of 85 runs between the two, Smith scored 58. A moment of madness, however, dented Lions’ hard-earned recovery.

Right after a 17-run 13th over, Karthik attempted a cheeky lap shot off Chris Jordan and perished in the process, for a vital 30-ball 26. The wicket came at the right time as it allowed Kohli to revert to Aravind right away in the 15th over and add to the pressure of the wicket. A poor knee-high full toss on the leg, however, allowed Smith to cart his fifth six of the night. Chahal, bowling his final over, slid in a quicker one to end Smith’s innings-reviving essay, as he hit one straight to Kohli at long off.

Shane Watson, one of Kohli’s most-trusted bowling lieutenants this season, repeatedly dented Lions’ hopes of a flourish towards the end. The retired Aussie frustrated Ravindra Jadeja with a couple of full deliveries outside the off-stump, luring the southpaw to play at one, which was hit to Gayle at point, in the 17th over. Eklavya Dwivedi took him on in the penultimate over, hitting two huge sixes before his third heave was sharply taken by Kohli at long off. Off the very next ball, Watson’s length delivery sneaked past Bravo’s big slog to crash onto the stumps, helping the Australian claim his best bowling figures (4 for 29) in IPL.

Defending 158 against a side boasting a batting reservoir, Lions needed an against-all-odds beginning to even stand a chance. Dhawal Kulkarni put his hand up, and quite spectacularly so. Virat Kohli, just 81 short of an unfathomable IPL tally of 1000 runs this year, chopped a back-of-a-length delivery from Dhawal onto his stumps, to walk back for his first duck in the tournament in two years.

AB de Villiers didn’t take time to get going, but Chris Gayle’s rigidity gave Dhawal another wicket in his next over. The big West Indian had his feet glued to the crease and attempted to play across the line at a length delivery, which took the inside edge to rattle the top of off-stump. KL Rahul was welcomed with a peach-of-a-delivery that squared the Karnataka batsman up, forcing him to edge it to Smith at first slip. Ravindra Jadeja completed the top-order demolition in the following over, as Shane Watson trudged back to a soft dismissal. AB de Villiers watched in horror as Sachin Baby became Lions’ fifth victim inside the powerplay overs as Royal Challengers were reduced to 31 for 5.

Stuart Binny showed promise of being good enough to play an active role in a de Villiers-led revival as the pair collected 18 runs off Shadab Jakati in the 9th over to begin a swift resurrection of Royal Challengers’ innings. That, however, was short-lived as a poor umpiring call sent Binny back to the hut at the halfway stage, adjudged leg before wicket off Jadeja. Replays suggested the impact was outside the line of off stump, bringing an irked Kohli, in the dug out, to his feet and towards the fourth umpire for a few clarifications.

De Villiers kept the fight going but a lull extended for three overs as Royal Challengers dragged their feet from 70 for 6 in 10 to 96 for 6 in 14 overs, still needing 63 off the final six overs. A message was conveyed to de Villiers about the threat of rain that was looming large, with lightning making a late appearance. The chance of rain served as the perfect cue for the South African, as he seemed to have shed the idea of taking the game as deep as possible. He went after Dwayne Smith to narrow down the equation to 49 off 30 balls. Raina’s massive, and shocking, gamble of turning to Jakati at such a delicate stage in the innings backfired spectacularly, as 16 runs came off his over to leave Royal Challengers needing 33 off the final four overs.

What a performance. Big Game, Pressure Situation & the best in the world, @ABdeVilliers17, delivers like no one else pic.twitter.com/NNGc24shV2

With the crowd chants of ‘A..B..D’ getting louder, the South African reached a pedestal from where he could confidently reverse-sweep a full delivery from Praveen Kumar and pummel a short delivery into the second row. With 21 to get from 18, Abdulla (33* off 25) decided to jump into action, smashing three successive boundaries off Bravo in the 17th over before finishing off the chase with 10 balls to spare.