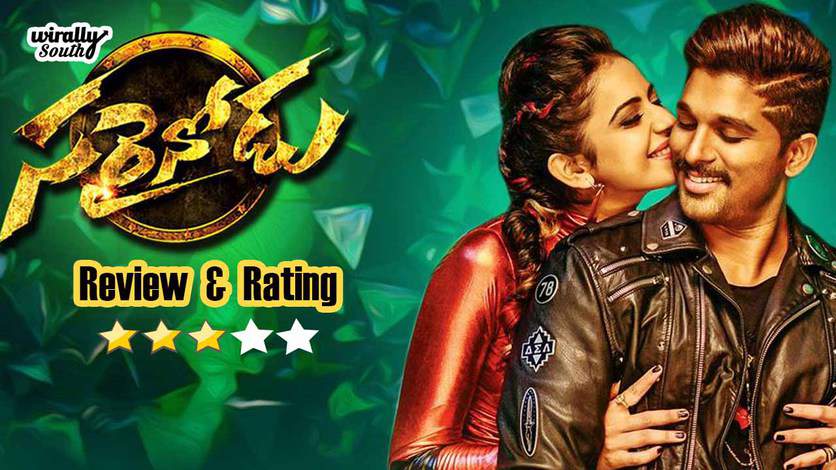 A boy who broke into the Telugu cinema arena of young actors with a unique character called Arya, has been proving himself by venturing into varied roles ever since then. Carrying the burden of a ‘star kid’, one can say that Allu Arjun has evolved the best so far from the ‘Mega’ camp and a decent actor for Telugu cinema as well.

With Sarrainodu, Allu Arjun has proved that he can not only be stylish but can woo you with his dappering ‘mass’ elements. True to the title, Sarrainodu, Allu Arjun fits in perfectly and has given a new flavour of taste to his audience. Though the story is predictable and has nothing new like any Telugu commercial movie, it is Boyapati’s treatment and Allu Arjun’s screen presence that keeps you seated in the chair.

Gana (Allu Arjun) is a military trained officer, who looks to handle justice where the system doesn’t work. He works with his Babai (Srikanth) who is a lawyer. Gana saves Jaanu (Rakul Preet Singh) from a land tangle which unknowingly locks horns with Vairam Dhanush (Aadi) who is a brutal land grabber and is son of the Chief Minister. Now it is nothing much interesting about the story that you would even want to read here. You can as well go and watch it. So, let’s talk about things that will keep you interested in watching the movie.

Elements to watch out for:

Allu Arjun Ofcourse : When a stylish star meets a ‘oora mass’ director, the character of Gana happens. And Allu Arjun pulled off this character with elan. This only shows what an actor Allu Arjun is evolving to be. You will not see him going over board on emotional levels, whereas on the other side, you will see his style in handling himself in situations very smartly. Kudos to AA for whatever hardwork he has put into this project!

Boyapati Sreenu’s Screenplay : We have been hearing Boyapati never leaves things unless he gets what he wants. That is exactly what he did I suppose. He ensured that his proportions of ‘mass’ elements blend well with Allu Arjun’s class acts.

Back Ground Score : Yes, if there is one thing that set the mood of the movie from its first teaser it should be that BGM score. All through the movie, you can see it is impressive and keeps the tempo of the movie going.

Aadi As Vairam Dhanush: This will be a surprise to everyone. Aadi looked spectacular and out performed his role as Vairam Dhanush. Staying subtle all time, he conveyed his brutality and crude nature with his tight face and body language.

Action Sequences: A special mention to all the fight masters who have choreographed the fights quite amazingly. Their punches make you tighten your fist at few moments.

I won’t mention the negatives here, for it is just one summer movie that has come to entertain you. So, it definitely has a few glitches since it has been played quite safely.

Catherine Tresa who played a commendable role of a local MLA looked quite convincing. Srikanth justified his presence once again. The rest cast supported well and yes, Brahmi was seen after a small gap.

Rishi Punjabi’s cinematography and Kotagiri Venkateshwara Rao tried their best to enhance the movie. But, when you take a weak or say predictable story line, nothing much can be done.

If you look you can manage some violence, throw your judgmental mindset out and sit to relax to a mass masala entertainer, Sarrainodu can be given a ‘thumbs up’. You will end up walking out of the hall figuring out what you actually liked about the movie and then Allu Arjun will flash into your mind.

So, if you want to see a new Allu Arjun, then go and watch it!!