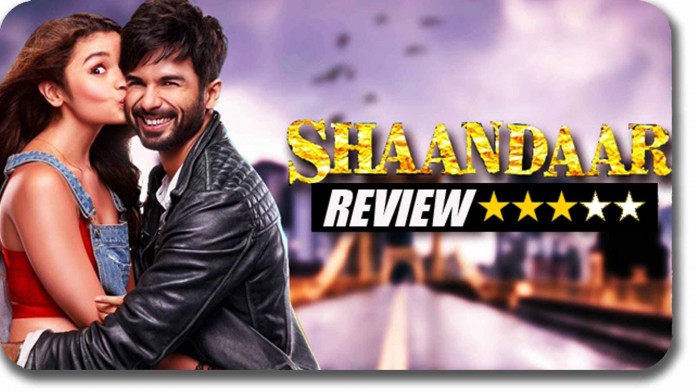 Shaandaar, directed by Vikas Bahl (Queen) and produced by Anurag Kashyap and Karan Johar is set to release this Dussehra. Like most Kashyap productions, this one has music by Amit Trivedi.

Anurag Kashyap’s rise to the top of the independent cinema movement has had Trivedi as a constant collaborator ever since the release of Aamir and Dev D. Trivedi seems to reserve his best for Kashyap and the collaboration has been magical so far.

So does Shaandaar live up to the reputation of their earlier collaborations? Let’s find out!

Shaam Shaandaar is typical Amit Trivedi fare. Amit Trivedi possesses a unique voice. It doesn’t begin steady and thick like most singers. Half the time, you’re scared he might slip, but Trivedi manages to hold on, and like good coffee, you notice the nuances of his voice after a little while.

Shaam Shaandaar uses Trivedi elements like dhol and trumpets, and a healthy mix of EDM to serve up a delicious starter to the album. And lyrics like:

Even without checking the credits, I had a hunch the song was written by Amitabh Bhattacharya, and I was right. The song stays on your lips after the entire album has been heard.

Vishal Dadlani has quickly become India’s only grunge voice, and when used well, has done magic with songs. Take for example Aao Na from Haider, or Aitbaar from No One Killed Jessica. The latter one was under Trivedi, and the effect of Trivedi’s angst and Dadlani’s aging rock star combined to whip up a powerful song.

Sadly, this time around, no such magic happens. Gulaabo begins with a lot of promise, but quickly slides into mediocrity. Dadlani’s USPs are used to the optimum effect, and for the first time, Dadlani gets overshadowed by his co-singer. The song really kicks into gear when Anusha Mani comes in, but it’s too little, too late, to salvage the song.

Nikhil Paul George, a musician and instrumentalist based in London, was heard in Barfi earlier, in the mellifluous Main Kya Karoon. George combines with Neeti Mohan to croon out the standard Amit Trivedi soft romantic track of the album.

Every Amit Trivedi album has one of those soft romantic ballads that are a huge hit on the radio, and are played over and over again in corny shows like Splitsvilla or Emotional Atyachaar. Trivedi did it earlier with Shaam in Aisha, Iktara (Wake Up Sid!) and Zinda (Lootera). He is a master of the soft, romantic track.

However, Nazdeekiyan seems jaded and repetitive. There’s a certain ‘been there, heard that’ feel to the entire song, and the lyrics by Amitabh Bhattacharya don’t help the proceedings. I wasn’t too impressed by Nazdeekiyan, but you might like it if you like soft songs, or if you like pink Barbies dressed in pink tennis dresses. It’s the kind of dumb song that you’d expect to find on the iPod of someone like, say, Sonam Kapoor.

Trivedi hires the most popular singer of the time, Arijit Singh to croon out this song which begins on an enigmatic note. It takes you a few minutes to get comfortable with it, and lyrics like ‘Machhar bhi kaate toh selfie kheench lele’ give you the picture of those misogynistic nok-jhok songs of the 90s. The song, however, goes on to become one of those chhed-chhaad songs that featured in films in the last two decades.

The song pays no credit to the singing talents of Arijit Singh, Trivedi, Neeti Mohan or Swanand Kirkire, and the beats, tempo, instrumentation of the song is pretty much even throughout. Finally, it sounds like a song Anu Mallik would create.

Adopting a synth-sound feel to it, Raita Phail Gaya is the last song of the album, sung by the interesting Divya Kumar, whose voice sounds like an interesting rehash of Sukhvinder Singh and Daler Mehendi. However, the synth-pop feel of the song, along with Kumar’s voice makes the song seem like one of those Akshay Kumar songs.

Lazy lyrics too – An entire line goes ‘Yo baby yo, yo baby yo!’. And yet another goes – ‘Everybody just clap your hands, and clap your hands everybody’. Or sample this: – ‘Gulzar ke geeton mein Yo Yo Honey Singh ghus gaya, toh raita phail gaya’.

Raita Phail Gaya seems like a song that both Trivedi and Bhattacharya created when they were already tried of the album. The song stops suddenly, and leaves you hanging nowhere.

Shaandaar, like Queen and English Vinglish is a small, tight Amit Trivedi album. It fails to impress you beyond a few moments, and doesn’t look like it’s going to be setting the radio waves on fire.

However, the film isn’t out yet. And a visionary director can elevate a rather ordinary sounding album to great heights with the right picturisation, so I’m still giving Vikas Bahl the benefit of doubt. Judged purely as a music album, Shaandaar fails to impress.

Heroines Who Portrayed The Role Of Powerful Police Officers In Tollywood...

12 Food Items You Cannot Afford To Miss When You Visit...

10 Songs Of Anurag Kulkarni That Prove He Is The Voice...

See How These Americans Reacted To Our Custom Of Pellichoopulu And...