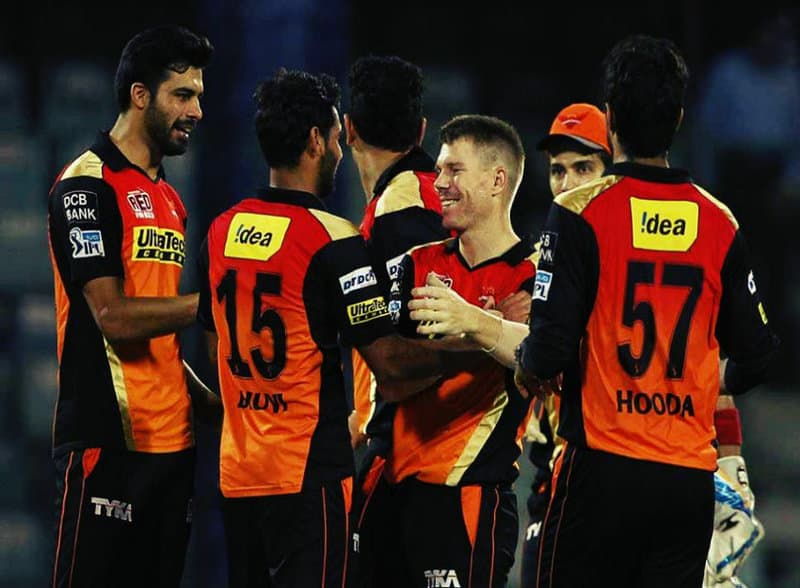 Sunrisers Hyderabad’s bowlers came to the forefront to pip Kolkata Knight Riders in the eliminator of the ninth edition of the Indian Premier League. Having batted first, Sunrisers were taken to a decent score of 162 for 8, thanks to a sprightly knock by Yuvraj Singh (44). Knight Riders lost early momentum in the chase and fell away with the loss of regular wickets.

With a modest score to defend, Sunrisers played to their strength of bowling at the Feroz Shah Kotla in Delhi and delivered. The bowlers didn’t allow opposition batsmen to settle into substantial partnerships, striking regularly them work hard for their runs. They eventually pipped them by 22 runs, beating them for the first time in the tournament and thereby booking their spot in the Qualifier 2 against Gujarat Lions.

In chase, Gautam Gambhir, with familiarity of the ground on his side, started strong, hitting the ball well. Robin Uthappa and Colin Munro fell cheaply while their skipper held fort at the other end with some impeccable timing. Tight overs from Mustafizur Rahman and Ben Cutting frustrated Gambhir and he eventually holed out as substitute fielder Vijay Shankar held onto a beauty in the deep for 28.

Yusuf Pathan, who has consistently rescued his side from mucky situations, failed at the crucial juncture, as he fell in the following over, leaving the job for Manish Pandey and Suryakumar Yadav to finish. Pandey, who has a great temperament for big games as seen in the past, once again stepped up and delivered, but couldn’t see the chase through, falling for 36 off 28.

Sunrisers frustrated Knight Riders after the powerplay, but Pandey kept the side in the chase. The target looked gettable with 53 needed off the last five overs but Moises Henriques came and dismissed Suryakumar, breaking the stand that could’ve potentially taken the game away. With Mustafizur and Bhuvneshwar Kumar bowling the last four overs, it was going to be a tough challenge for Kolkata from there. Bhuvneshwar ended up with 3 for 19, while Henriques finished with 2 for 17 as Knight Riders finished with 140 for 8.

Warner’s use of his bowlers was exceptional, mixing them up really well, as has been the trend all season. After an abysmal fielding performance against Delhi Daredevils in Raipur, Sunrisers bounced back well to put on a clinical performance. Barring an overthrow that raced away to the boundary in the opening over and a dropped catch by Mustafizur, they were largely flawless in the field. They flung themselves at the balls along the ground, held onto their catches and showed great intent despite not having too many runs on the board.

Earlier in the day, Gambhir was all over the Sunrisers batsmen after curtailing runs upfront with Yusuf Pathan and, the pacers tying down David Warner’s off-side play. They did well to stifle him to the extent of frustration, waiting for him to err. He eventually made the same mistake as Henriques, succumbing to a flat-batted shot, but not before sharing a 59-run stand for a run-a-ball 28. Warner was furious with himself, and with good reason, as the onus was on him to lead the way after Shikhar Dhawan fell cheaply in the second over.

Kolkata’s bowlers’ astuteness and aggressive fields set by their captain bode well for them after opting to bowl. Kuldeep, who was brought into the attack in the eighth over, exhibited beautiful control whilst mixing up the deliveries to outwit the batsmen. He was hit for a six by Moises Henriques in his second over, but came back strongly to dismiss him next ball for a 21-ball 31. The batsman got into an attempted heave earlier than he should have; the ball caught the back of the bat as Kuldeep took an easy catch.

Striking on successive deliveries, Kuldeep roared in delight as Warner was bowled off the next delivery with one that came into the left-hander. He mixed up his deliveries to perfection as the ball skidded on, returning figures of 3 for 35.

At the halfway stage, the scoreboard read 71 for 3, before Yuvraj Singh and Deepak Hooda took matter into their hands. Yuvraj took on Kolkata’s spinners, countering the belligerent fields set by Gambhir who was on an all-out attack, while rotating the strike effectively. He tried to shift momentum to his side with Deepak Hooda, who once again got off to a start. Yuvraj showed glimpses of the old as he whirled his bat, lifting a flighted delivery off Kuldeep for a boundary over long on.

Morne Morkel and Jason Holder who filled in for an injured Andre Russell, did well to restrict the opposition with tight lengths and lines without any width on offer. Along with failing to apply themselves in the middle, the miscommunication between the batsmen was apparent. Unable to capitalise on his start once again, Hooda was run out again due to lack of cognizance for 21. Taking off for a run when there was a half-hearted call from Yuvraj who had dabbed it to mid on, he took off straightaway without watching the ball and couldn’t make it back on time as Kuldeep fired in a dead-eye throw.

Yuvraj was livid, but was left with the responsibility of carrying the team forward as Cutting departed for a duck soon after. With Sunrisers 124 for 5 in the 17th over, they needed some mighty blows to get anywhere close to a contestable total. There was a huge mix-up between Yuvraj and Naman Ojha a few balls later as both batsmen were nearly at the same end after the latter wasn’t ready for the single. No damage was done though as Yuvraj made it back to his end on time, which was lucky for Sunrisers as he struck a flurry of boundaries after. However, the pair after putting on 21 in 2.2 overs departed in the same over for 44 off 30 and 7 respectively. Bipul Sharmas six-ball 14 cameo finally gave them a few last-ditch runs.

Eventually those runs came in handy as Sunrisers pipped Kolkata to ensure that they had one more chance to make it to the final.

Take A Look At The List Of Doctors Turned Actors In...

Puri’s Wisdom Of Words Through These Podcasts Will Change & Motivate...