For people with a combination of travel and spiritual goals, this is a place you must visit. We have been to and heard of temples on various places on Land. But this temple of Lord Shiva is out of the world. It lies inside the ocean. Nishkalank Mahadev Temple in Koliyak, Bhavnagar, Gujarat is full of wonders, glory and awe. This temple is situated near Bhava Nagar in the Arabian sea, at Gujarat. The main deity is Lord Shiva. This temple is buried inside the sea. On a heavy tide day, all that can be seen are the flag and a pillar. The temple has 5 distinct swayumbu Shiva lingams inside.

This temple has a history that dates back to the Mahabharat Era. Pandavas killed all the Kuravas and won the battle. They were struck with distress and agony as to having made asin by killing their own family. They wanted to seek to redemption and reached Lord Krishna who handed over a black Flag and a Black COW. He told the Pandavas to follow it, until both of them turn white. And that is when they will be pardoned and the Pandavas were also advised to repent for their wrong doing to Lord Shiva. They started their journey behind the cow and followed it for days, travelling to many places, but the color never changed. Finally, when they arrived at the Koliyak Beach both the cow and the flag color turned to white. Pandavas were exalted. And all the 5 brothers sat for deep penance, meditated on lord Shiva. Lord Shiva impressed by the brothers showed up in the form of a Lingam to each brother. As they meditated, each lingam appeared in front of each brother. In total there were 5 (Swayumbu) lingams that showed up on their own. Pandavas were delighted to see this and they worshiped all the five lingams with great devotion. Lord Shiva here is known as Nishkalan Mahadev. ‘Nishkalank’ has many meaning they are clean, pure, guiltless, to cleanse, to purify, etc.

An idol of Lord Shiva was established in an island, over the sea about 3 km to the east of Koliyak. Each lingam has a Nandhi facing it. The lingams are spread across a square Platform. There is a pond called Pandavas pond. Now the island is under heavy tide. This is one of the rarest of rare temples. The sea everyday withdraws, paving way for the devotees to offer their prayers. And after 7 pm, the temple is again covered under the fierce tide.

8 Astounding places in Nirmal & Adilabad That Are Way Too Underrated. 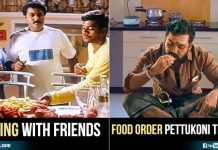 8 Astounding places in Nirmal & Adilabad That Are Way Too...

9 Directors Who Made Unique Movies But No One Knows What...

This Heartfelt Take On Best Characters Of Sam Is A Proof...

Take A Look At These Tollywood Double Action Movies Which Entertained...

5 Quick And Easy Pre-Work Out Meals

Internet Is Tripping On Balayya’s New Look & These Memes Are...

Easy Methods Which Help Us Find Out If Someone Is Stealing...

We Tried Tollywood Celebrity Pics With The Faceapp Filter & The...

8 Astounding places in Nirmal & Adilabad That Are Way Too...

9 Directors Who Made Unique Movies But No One Knows What...

This Heartfelt Take On Best Characters Of Sam Is A Proof...

Take A Look At These Tollywood Double Action Movies Which Entertained...