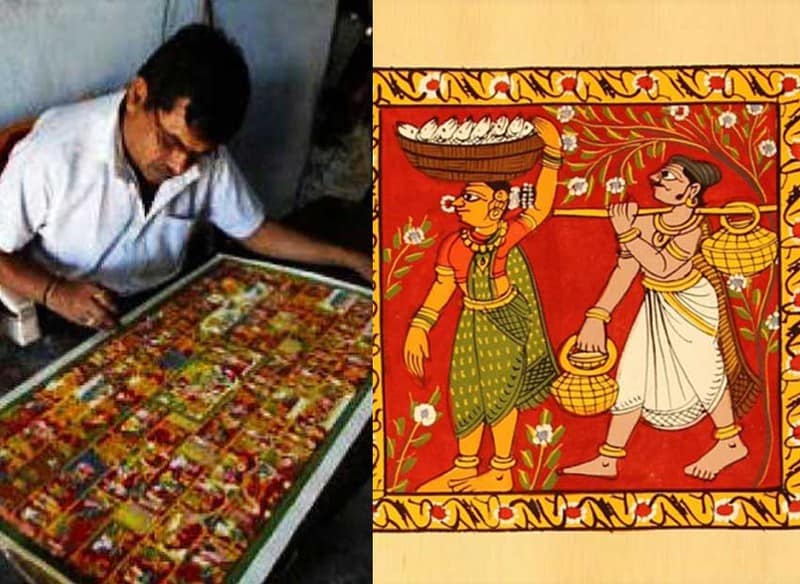 I had attended a workshop at the Icon Art Gallery where artisans were making colourful Nakashi masks. While I was learning how to make the Nakashi mask myself, I asked the artisan about this art form which was still new to me. So far I had seen patachitra of Bengal where artisans paint stories of Gods and Goddess and popular folklore on long sheets of parchment. Similarly, I found the artisans from Warangal painting stories from mythology and folklore on long scrolls of canvas. While the other artists were giving final touch ups to the masks and dolls. Nakashi art is also known as Cheriyal scroll paintings. It received a Geographical Indication (GI) status or Intellectual Property Rights Protection in 2007. This art is slowly dying and the artisans at Warangal are finding it tough to keep this tradition of story telling alive. Though some art galleries and Universities are funding the artisans and trying to preserve this art form, still a lot needs to be done by the public to retain this rich cultural heritage of both Telangana and Andhra Pradesh. The type of stylized scroll painting with earth colours were brought to India by the Mughal rulers and their origin can be traced back to 16th century Rajasthan. Craftsmen used the paintings and dolls to tell stories of the cultural and social settings prevalent in the state of Telangana. Apart from mythology and folklore,beautiful ancient sculptures of the temples also influenced the artisans to make similar paintings on the scrolls with a predominant hue of red in the background. The Nakashi paintings are now confined to the village of Cheriyal thus they are popularly known as Cheriyal scrolls. In each region of India scroll paintings similar to Nakashi has developed with its characteristic content or style depending on the patronage, socio-economic conditions and local ethos. In Rajasthan it is known as ‘Pabuji ki Pad’, ‘Devnarayana katha’ and stories from the legend of ‘Dhola and Maru’. Goa developed the ‘Dasavathara’ and in Maharashtra this scroll painting is popular as ‘Pinguli’ and ‘Chitra Katha’ traditions. Maharashtra and Gujarat are also known for a sophisticated scroll painting tradition called the ‘Prasasti Patra’. In Orissa and Bengal scroll paitinings are famous for their Patachitra traditions. The canvas is made by an elaborate process. The canvas of khadi fabrics is treated with rice starch, gum water, white mud or suddha matti and a paste of boiled tamarind seeds. Each coating is dried before putting the next one. Once the canvas is ready the painting starts. The design is sketched directly on to the cloth with a brush made of squirrel hair tied to a small stick. The paints are made from natural sources (water colours are used mainly and it’s derived from natural sources).  The red oxide paste called ‘geru’. Lamp soot is used for black shade, sea shells for white, while the vibrant red colour comes from an Ayurvedic product called Inglicum. The natural colours are mixed manually using mortar into a thin fine paste. They are dried and stored away and portions are taken as and when required. The well defined outlines show the skills of the craftsmen and the vibrant paintings with exotic art forms are their signature style. The dolls of Cheriyal art is made from wood, saw dust  tamarind paste while the masks are crafted from dried shells of coconut. The colour red predominates the background of the paintings that depict stories from Ramayana, Krishna Lekha, Markandaya Puran, Mahabharata and Shiva Purana. Some paintings also tell the stories of Madiga and Gauda. The Paintings also narrate the story of day to day living in villages like farmers working in the paddy field or a woman cooking in a kitchen. The nakashi paintings also showcase festivals and traditional celebrations and also the costumes of Andhra Pradesh (place of origin of this art form). The narrow panels of paintings, wall adornments, banners and single pictures have replaced the traditional Cheriyal scrolls since people tend to buy them during fairs and exhibitions.

The Nakashi art has beautiful borders that usually comes in bright colours like yellow, green, blue with a background dominated with red. The Nakashi scrolls that were used to tell stories in ancient times are now used as wall hangings. The dolls and masks are also interesting curios pieces that can be used to decorate the houses, atleast this way the art will still live.

The Heritage Value of Nakashi Paintings Nakashi art though practised in Cheriyal of Warrangal district. It still has a distinct Telangana flavour in its form and depiction. The ancient paintings initially inspired this style of painting but later it became popular in the form of cloth paintings that was used as an efficient tool to make story telling more powerful. The balladeer community known as Kaki Padagollu’ would wander from one village to another with a team of five people.  Two people would narrate the story while the others would play musical instruments like harmonium, tabla and castanets. They displayed the scrolls and narrated ballads based on Puranas, epics and folk tales. This 500 year old art form and in the olden days the Nakashi painters would get coconut and rice as their fee. This custom still continues, the ritual of presenting dried coconuts as a token of appreciation still continues. With new forms of entertainment capturing attention of the rural folk the art of story telling don’t get patronage anymore. You will not find any wandering storyteller using these nakashi dolls or masks to narrate the story of Ramayana in street or fairs. What a loss indeed! Now there are only two families in Cheriyal who are still keeping this tradition of Nakashi painting alive despite heavy odds. Most artisans who could previously lead a comfortable life by painting cheriyal scrolls have to turn to weaving, tailoring or farming to earn their livelihood. However there is a flicker of hope still burning bright since The School of Tribal and Folklore of Sri Potti Sriramulu Telugu University are trying to support the two families of Nakashi art painters financially and the school is  also buying some of their works to put it up in the museum. While some government agencies are also supporting this rural folk art form. However, a lot needs to be done to bring back the art form back into the public memory so that this folk art doesn’t die out completely. A news report states that Sri. D. Vaikuntam of Cheriyal is the last bastion of this art and he has been painting more than three decades. He was born to a family where Nakashi art was passed on hereditarily. Nakashi Venkataramnaiah’s family is perhaps the only and last family to pursue this art form. Presently the sons of D. Vaikuntam is practicing this art form.

It is true that Nakashi art is a way to make people familiar with their rich cultural heritage and it also has immense historical importance. Yes, there is a regret that this art form is not getting patronage and is only used to decorate the walls of homes. However, there is also a hope that the Government will promote the Nakashi art and see to it that more artisans practice it in the days to come. The vibrant hues of the scroll paintings should never fade from the memory.