Greatly known today as one of India’s most revered and successful woman, Sudha Murthy is an engineering teacher, philanthropist as well as an eminent writer of many known and appreciated Kannada and English novels. Through her books, she has encouraged both the young and elderly to inculcate a habit of reading as part of their lives.

She is the chairperson of the Infosys Foundation and a member of public health care initiatives of the Gates Foundation. Through her Infosys Foundation, she has helped in spreading awareness about education, public hygiene, poverty alleviation, etc. She aims to provide the government aided schools with computer education and library facilities. She is also known for promoting and imparting education for poor children and for being one of the brains behind Infosys, one of India’s leading IT companies. 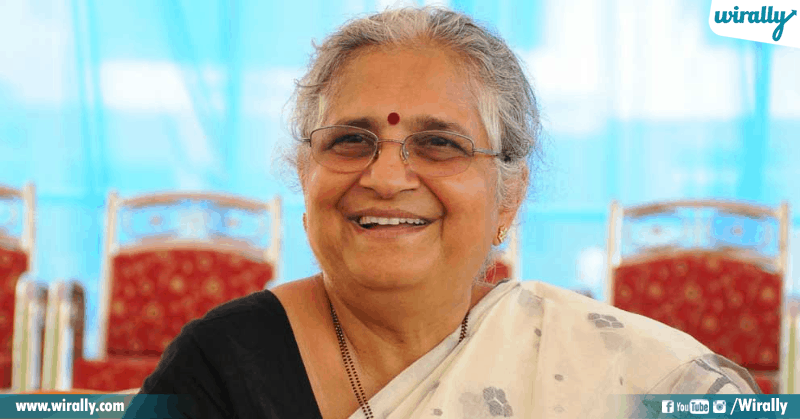 Sudha Murthy began her professional career as a computer scientist and engineer. After that there was no stopping her, from just a small town girl, she became the first female engineer to be hired at India’s largest auto manufacturer, TATA Engineering and Locomotive Company (TELCO). Apparently before being hired, she had written a postcard to the company’s Chairman complaining of the ‘men only’ gender bias at TELCO. As a result, she was granted a special interview and hired immediately as a Development Engineer. She later joined Walchand Group of Industries at Pune as Senior Systems Analyst.

Raised by her parents and maternal grandparents, Sudha Murthy was born on 19 August 1950in Shiggaon, Haveri in Karnataka, India. She is the daughter of Dr. R. H. Kulkarni who was a surgeon. Murthy completed her Bachelor’s in Engineering(B.E) in Electrical and Electronics Engineering from
the B.V.B. College of Engineering & Technology. She stood first in her class and receiving a gold medal from the Chief Minister of Karnataka. She also completed Masters in Engineering (M.E) in Computer Science from the Indian Institute of Science, Bangalore. 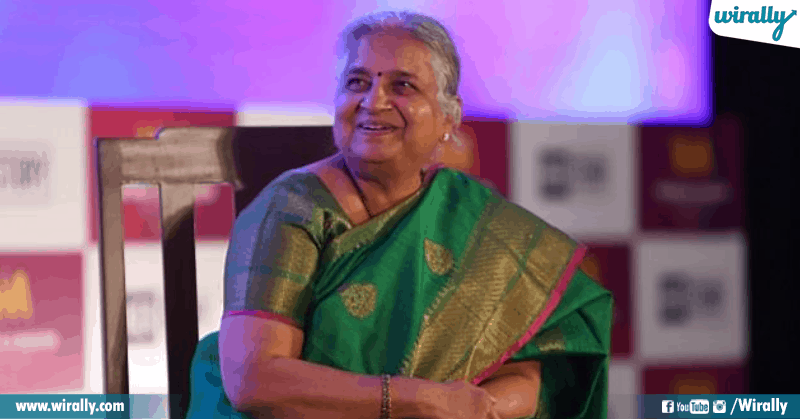 Murthy is best known for her social work and her contribution to literature in Kannada and English. In her 70 years she has accomplished more than the ordinary, never underestimating herself or getting caught up with the society’s norms of a ‘proper woman’. As a result of all her hard work, she has received numerous awards for her academic excellence. In the year 1995, she was awarded the ‘Best Teacher Award’ from Rotary Club at Bangalore. In 1996, she started the Infosys Foundation and to date, she has been the Trustee of Infosys Foundation and a Visiting Professor at the PG Center of Bangalore University.

She also established a Murthy Classical Library of India (MCLI)at the Harvard University. The Murty Classical Library of India aims to reintroduce the greatest literary works of India from the past two millennia, a part of world literature’s treasured heritage, to a new generation. She also got recognized for the Raja-Lakshmi award by the Sri Raja-Lakshmi Foundation in Chennai in 2004. She won the award for her outstanding performance is Social works. In the year 2018, Sudha Murthy received the Life Time Achievement Award at the Crossword-Raymond Book Awards. The very next year, IIT Kanpur awarded her Honorary Doctor of Science (DSc) degree. Sudha Murthy has written many books but her first notable work was entitled ‘How I taught my Grandmother to Read’ & many other short stories. The book was translated into 15 other languages.

It reflects her childhood association with her paternal grandparents. Apart from teaching at the Christ University she used her time wisely by founding several orphanages. Being such a logical as well as creative woman, it is interesting to see her reveal in an interview with Filmfare magazine, that she is a movie buff and has more than 500 DVDs of various different films at her home. Some of Sudha Murthy’s widely acclaimed books include ‘The Mother I Never Knew’ , ‘Three Thousand
Stitches’, ‘The Man from the Egg’ and ‘Magic of the Lost Temple’. Believe it or not, she has also experimented in the acting industry by appearing in two films, a Marathi film ‘Pitruroon’ and a Kannada film ‘Prarthana’. One can say she’s an all-rounder. In 2019, she was awarded with the Padma Shri which is the highest civilian honour in India. 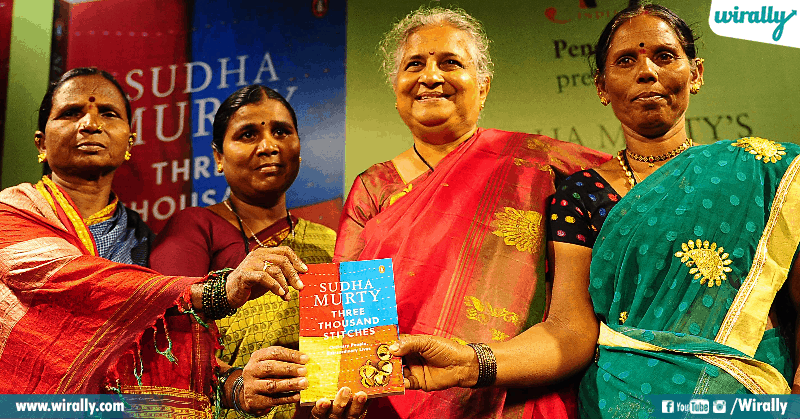 The Padma Shri is the fourth highest ranking official as per the Government of India and she even obtained a doctorate for her publications. At the age of 70 she is still active and healthy and loves teaching hence pursues her interest and passion by training students in the PG Center of Bangalore University as a Visiting Professor. It is her personality and ambition that attracts all those around her and those who look up to her.

She is committing to empowering and fighting for women, spreading the awareness of rural education, public hygiene, poverty alleviation and much more. She helps in building toilets for those in need because she wants a clean India. The phrase ‘actions speak louder than words’ is perfectly suited to her.What she preaches she provides.

She has been passionate in helping people in flood affected areas too. Even as a writer, through her stories, she speaks realistically about hospitality, her childhood, her views on donations and charity. She even experimented with children stories, for which she is most known and revered for. She initially started off with Kannada stories some of which were translated into English. Some of the famous ones in Kannada are – Dollar Sose, Kaveri inda Mekaanige, Runa, Hakkiya Teradalli and Gutthondu Heluve.

In recent news, Murthy says she has seen from close quarters how liquor has ruined poor households and destroyed families. Hence, she urged the state government to ban the sale of liquor in the larger interest of poor women. “Increasing the sale of liquor may benefit the government in terms of revenue. But liquor is a social evil, and its biggest victims are women and their children,” Murthy told ET.

Women like Sudha Murthy who single-handedly worked towards her success, inspire and give all women and even men confidence to believe in their dreams and work hard towards achieving them.