It was April and Pokiri was the big story. The film was ruling the box-office, critics were tossing out good reviews like confetti and trade pundits were dubbing the film’s director Puri Jagannadh as a sensational director of the year. For Mahesh Babu it was a glorious moment. The excitement and hysteria that Pokiri created was phenomenal and its success brought about a lot of riches to everybody remotely connected with the film.. To the filmmakers and the industry wallah’s it raked in moolah and for the audiences it gave them every minute of their money’s worth of contentment. But for one man in Vijayawada who was selling tickets in black, it was then paisa vasool.

One of my friends recently went to a registrar office to register his newly acquired land in Vijayawada. There he met a lean chap who bought a plot in the outskirts of Vijayawada for Rs. 2 lacs. That guy turned out to be a black marketer who sells tickets at the theater playing Pokiri in Vijayawada. Upon enquiring he declared that he bought the land with the profits he made by selling black tickets for Pokiri film at Vijayawada Pokiri main theater. And there are few other guys who became likhpathis by selling Pokiri tickets in black. We don’t see any Telugu film going for housefull for 100 days in a genuine way. But Pokiri is an exception. Pokiri has great guns even today in major centers.

This incident reminds us of one thing. It’s very much like these movies…. When we get to the release date, we realize that the movie doesn’t belong to us any more. It belongs to the world and you just hope that you did okay. But in Pokiri’s case it’s double whammy. Aap Khush..Aur Hum Bhi! 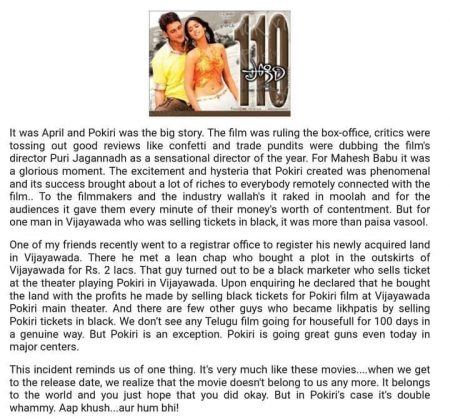