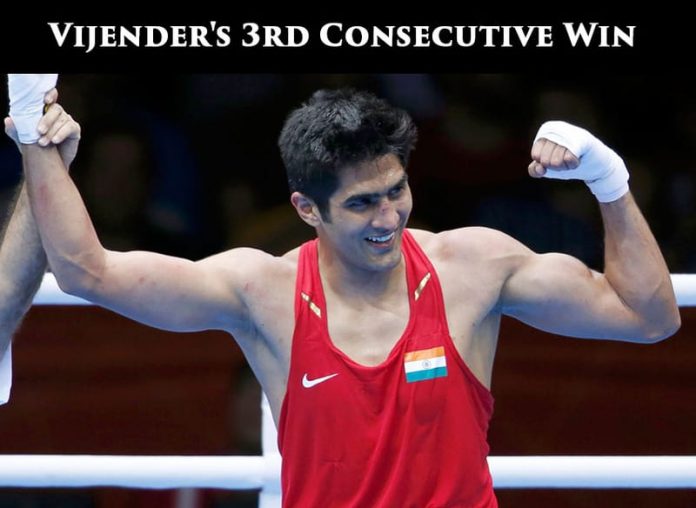 India’s Vijender Singh, who became the first Indian to compete in Pro-Wrestling seems to be on a winning streak, as he carved up his third consecutive victory, by knocking out Bulgarian opponent Samet Hyuseinov.

The match was played in Manchester Arena, UK on Saturday, 19 December. Vijender Singh, who quit his amateur career to turn into a pro-wrestler in June this year, has been on a winning streak ever since he made his pro-wrestling debut.

Vijender Singh disappointed a lot of fans by opting for a career in pro-wrestling, because it means he won’t be able to represent India anymore in international sporting events. His move to join pro-wrestling automatically ruled him out of India’s 2016 Olympic campaign.

Prior to the match, Vijender’s opponent Samet Hyuseinov involved in some trash-talk, going by his ranking in the circuit. “I don’t think Vijender is ready to fight someone like me yet and he is saying what he will do to me as if I don’t exist and he will stop me. I’m the most dangerous opponent to date for him,” Hyuseinov said. “Believe me I am going to cause a big upset (for Vijender fans), I’m sorry India but your man is going to lose.”

Movies that the stars of Bahubali have done after the release...

Should we really be ‘celebrating’ Children’s Day?