The splendid cocktail of awesomeness, the most controversial and bad-ass comedians in the country, the All India Bakchod are unarguably the most realistic humorists of our time. We know much about their humor but little do we know about them before they were AIB.

“I started writing for television from the age of 17. Yep, I got my first massive pay cheque the same year I saw my first pair of breasts” writes Tanmay Bhatt, the chubby comic canon ball!

Tanmay had been doing the round in open mics before he got professional. He joined Weirdass Comedy and became Vir Das’s opening act on high sellout “Walking on Broken Das”. He was one of the first four comedians to be featured at The Comedy Store Mumbai’s first all Indian comedian line up titled “Local Heroes”. Soon, Tanmay performed alongside comics from the UK in their “Best In Stand Up” nights, performing 5 times a week. Tanmay is also a member of the awesome Weirdass Comedy – India’s first and only comedy company that writes, performs and directs all comedy content on all formats. He is a member of the Cardinal Bengans, an improv comedy troupe. Tanmay was seen alongside Vir Das, Ashwin Mushran and others on Star World’s first-ever Indian New Year’s Special RIPping the Decade, which he co-wrote.

Khamba has been a weekly columnist for Firstpost and DNA newspaper, Mumbai. His writings have been published and featured in GQ India, Grazia, Hello Magazine, Marie Claire India, India Today, HT Brunch, NH7, Yahoo! Exclusives and more. His television credits include The Indian Television Awards, Jay Hind and MTV Rock The Vote which he wrote and co-starred in. Some of his corporate clients include Hindustan Times (Crystal Awards), ICICI, Tatva, Facebook, AT Kearney, Publicis Groupe). He studied journalism from Delhi College of Arts & Commerce (Delhi University).

After graduation, Khamba was all set to move to England for his Master’s degree on a full scholarship. But he contracted Tuberculosis and was bed-ridden for around six months. Sick, bed-and-angst ridden, and heart-broken (apparently he was also going through a bad break-up at that time), he amused himself by watching stand-up comedy on YouTube. He soon started Khamba’s Blog that he claims was mainly to kill time and vent his pent-up frustration. He presented a sharp and quirky take on social and political issues in India. The blog became hugely popular and earned him thousands of followers on Twitter. Rajneesh Kapoor, a popular stand-up comedian in Delhi, stumbled upon his blog one day and found it hilarious. Impressed, he invited Khamba for an open mic night. And that is how his journey began!

Rohan Joshi was one of the later stars to join the All India Baakchod. Little is known about his early life. Besides AIB he writes for CNNGo.com and is/was dating Alia bhatt’s sister Shaheen Bhatt.

Here is what his profile at CNNGo.com says “Rohan Joshi is a writer, TV presenter and stand-up comedian (not necessarily in that order) born and raised in Mumbai. He also aspires to be a “Professional Beer Drinker”, has an irrational obsession with LOST and Tina Fey, and a completely rational fear of anyone who plays Farmville. By writing for CNNGo.com he hopes to “bring respectability” to his life, and expects to be rehabilitated into civilized society soon. Assuming he can stop with the kicking and screaming, of course”

Ashish Shakya, an Electronics and Telecommunications Engineer from University of Mumbai has been co-writing the hit news comedy show ‘The Week That Wasn’t with Cyrus Broacha’ on CNN-IBN for about half a decade.

He also has a weekly humour column (more than four years old) with the Hindustan Times, titled ‘The Blunder Years’, wherein he expands on everything from Pakistan to the futility of politics and online dating and everything in between. Following a series of open mics and pub gigs, Ashish earned himself a recurring spot at the prestigious Comedy Store (now known as the Canvas Laugh Factory), Mumbai, and was one of the first Indians to get picked for their roster.

He is now a regular fixture at the Laugh Factory, wherein he performs with top Indian and international comics. He has performed in Dubai, Mumbai, Bangalore, Pune, Delhi, Gurgaon, Hyderabad, Goa, Indore and Chennai, and has written for brands that include the Filmfare Awards 2012, ET Now, the Hero Group and the Aditya Birla Group, to name just a few. Ashish’s edgy stand-up takes a no-holds-barred look at everything from Indian and international politics, to pop-culture, relationships and the general idiocy and quirkiness of the world. 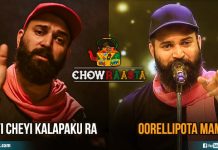 What If Our Fav Heroes Are Contestants In Biggboss & Deliver...

On Gopi Sundar’s Birthday, Let’s Take Dig Into What Makes Him...

5 Delicious Sweets From The City Of Nawabs !