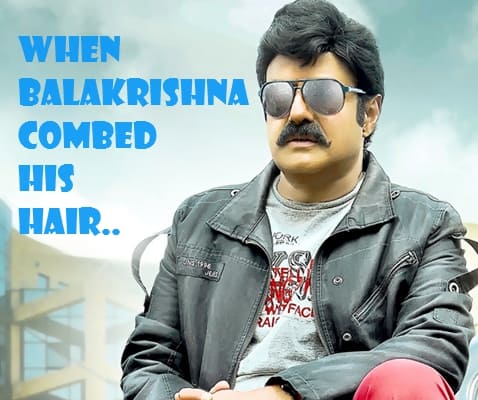 Since the days of Black and White movies, wigs have always been an integral part of a hero’s appearance. All the major stars of yesteryears invested time and effort in getting the right hairstyle  wig for themselves.

And when Chiranjeevi jumped onto the scene with his natural, bouncy hair flying, that wigs became even more crucial to the star’s appearance. Every hero who wore a wig, some how maintained the hair style from waking up in bed, bathing, through songs and fights. Nothing would spoil his hair; maybe a strand would hang out over his forehead and that too in a fight. Else, everything would be intact.

One need not mention that NBK took this to another level. “Come on, you know I wear a wig, so what’s wrong if I tried some hairstyles???? Nothing wrong, it was just ‘little’ over the top. Let’s take a look on different kind of wigs he tried out. Errr… hairstyles!

Wearing a wig means it’s not your hair. Obviously no attachment. Therefore, you don’t need to comb it.

He did get interesting after a while.

Now, in Okka Magadu, he had a good hairstyle. No complaints! Just that it was the only thing that worked out for the movie. Seriously, nothing else.

When hair gets curly and stiff at the sametime.

Whom will you blame when it gets spoilt??

Just for You : Powerful Balakrishna Dialogues