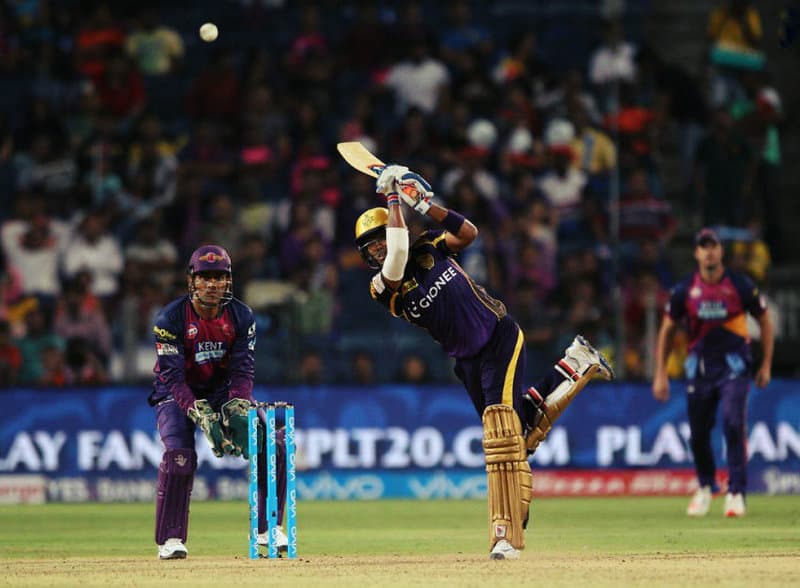 SuryaKumar Yadav’s 60 of 49 balls was the backbone of the KKR run chase as they hunted down Rising Pune Supergaints 160/5 with two wickets and three balls to spare in a closely-fought Indian Premier League (IPL) encounter at the Maharashtra Cricket Association Stadium here on Sunday.With the win, KKR go atop the points table with four wins from five matches.

Chasing a target of 161, KKR got off to a disastrous start as Robin Uthappa was adjudged leg-before-wicket off Albie’s very first delivery of the innings.

But then skipper Gautam Gambhir and Suryakumar got together to put on a breezy 31-run partnership of just 2.3 overs. Unluckily for KKR, Gambhir was run out as he misjudged a double. His desperate dive to make the ground was not enough as Mahendra Singh Dhoni took the bails off in a flash.

But the visitors kept the scoreboard ticking at a rapid pace and with six overs gone, they were 59/2.

Later on Suryakumar and Pathan, who finally found some rhythm in the competition, put on a pacy 51-run partnership. Pathan hit two huge sixes en route to his 36 but then was trapped right in front of the stumps by Rajat.

Though it dented KKR a bit, West Indies all-rounder Andre Russell once again brought down the asking rate by hitting Ankit Sharma for two sixes in the 17th over. Although Russell holed out in the deep thereafter, KKR was within touching distance and they finally got home with Umesh Yadav hitting the winning runs.

Earlier, a late cameo from Dhoni’s 23 and Rahane’s 67 manage a challenging total. For the Knights, Shakib Al Hasan, Sunil Narine, Rajagopal Sathish and Umesh Yadav bagged a wicket each. Pune got off to a brisk start with 11 runs coming off the third over. But with 24 runs on the board Faf Du Plessis was cleaned up by left-arm spinner Shakib Al Hasan.

The wicket put the brakes on the scoring rate and the Supergiants only managed to score 31/1 by the end of the powerplay.

But then Ajinkya Rahane and Steve Smith together tried to knit a partnership. The duo ran hard between the wickets and picked up the occasional boundary even though KKR kept them on a tight lease.

However, after a stand of 56, Smith — who was looking dangerous — was run-out with Rajagopal Satish taking the bails off at the non-striker’s end in the 13th over. Satish then picked up Thisara Perera and Narine got rid off Rahane as Pune were left struggling at 119/4.

With a few big shots from Albie Morkel and Dhoni’s late fireworks the Supergiants got to a fighting total with the last over from Morne Morkel yielding 17 vital runs.