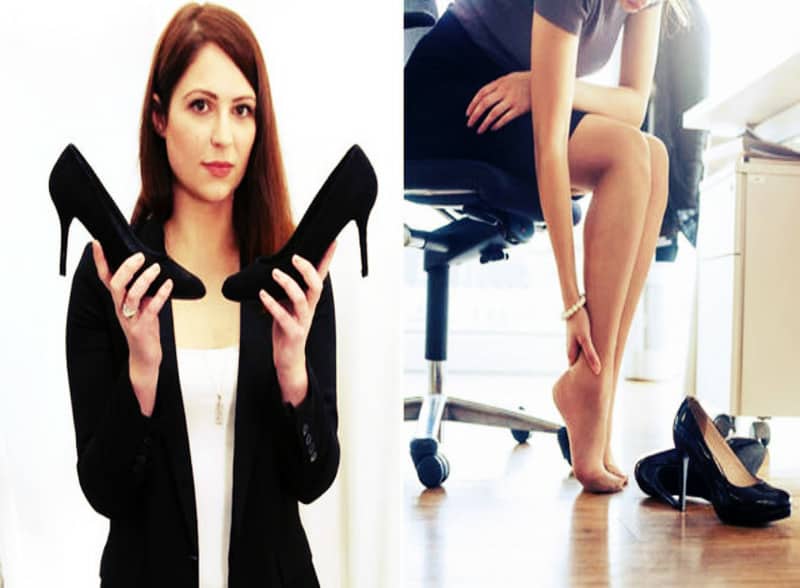 A receptionist claims she was sent home from work at a corporate finance company after refusing to wear high heels.

Nicola Thorp, 27, from Hackney in east London, arrived on her first day at PwC in December in flat shoes but says she was told she had to wear shoes with a “2in to 4in heel”.

Thorp, who was employed as a temporary worker by PwC’s outsourced reception firm Portico, said she was laughed at when she said the demand was discriminatory and sent home without pay after refusing to go out and buy a pair of heels.

Portico said it set the uniform rules for staff but would review its guidelines, the BBC reported.

Thorp told BBC Radio London: “I said, ‘If you can give me a reason as to why wearing flats would impair me to do my job today, then fair enough’, but they couldn’t. I was expected to do a nine-hour shift on my feet escorting clients to meeting rooms. I said I just won’t be able to do that in heels.”

Thorp said after speaking to friends and posting about the incident on her Facebook account she realised that other women had been in similar positions. She has since launched a petition calling for the law to be changed so companies can no longer force women to wear high heels to work. It has so far received more than 11,000 signatures.

“I was a bit scared about speaking up about it in case there was a negative backlash,” she said. “But I realised I needed to put a voice to this as it is a much bigger issue.

“I don’t hold anything against the company necessarily, because they are acting within their rights as employers to have a formal dress code, and, as it stands, part of that for a woman is to wear high heels. I think dress codes should reflect society and nowadays women can be smart and wear flat shoes.

A Portico spokesman said: “In line with industry standard practice, we have personal appearance guidelines across many of our corporate locations. These policies ensure staff are dressed consistently and include recommendations for appropriate style of footwear for the role.

“We have taken on board the comments regarding footwear and will be reviewing our guidelines in consultation with our clients and team members.”

A PwC spokesman said: “PwC outsources its front of house and reception services to a third-party supplier. We first became aware of this matter on 10 May, some five months after the issue arose. The dress code referenced in the article is not a PwC policy.”