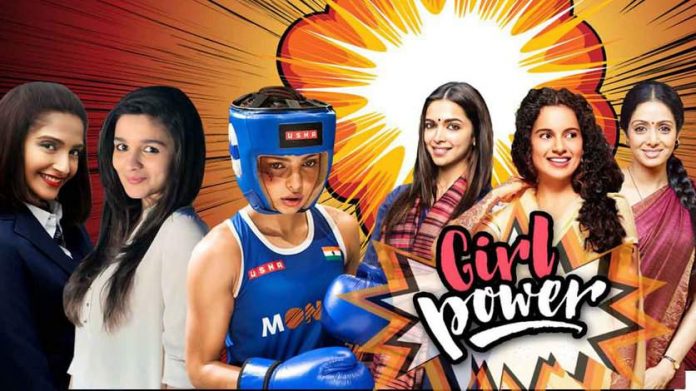 Films are believed to be a reflection of the society we live in. They are said to be inspired by the cultural and social aspects of the environment around them, taking care of the liked and dislikes of the society. Though this might be true only to a certain extent.

We hardly see Bollywood movies giving its leading ladies the roles much below their capacity as an actor. Very rarely do we see an actress putting out her point of view. Women in Bollywood are a tad bit unrealistically portrayed. In the current age there has been a lot of discussion on feminism, some have got it right and some totally wrong. In Bollywood too there are very few films that bring out the actual meaning of feminism. We have listed down few such Bollywood movies: Chak De India : This was one of the most prominent movie about two not so prominent things, hockey and a women’s team. A group of girls from all over the country come together to win the hockey world cup for India. A scene where the girls play against the men’s team and gain their appreciation despite losing to them is a heart winner. Queen : the feminist of Bollywood, KanganaRanaut, actually lived up to her image and came up with this gem of a feel good film everyone needs to watch. A timid girl travels to Paris, her honeymoon destination, after being dumped by her fiancé. She finds her actual self in this tour and transforms into a strong and independent woman. English Vinglish : a middle aged woman living in the shadow of her family and continuously compromising on her self-respect gets a chance to go to a different country and shed off her insecurities and challenges the problems she faces. Also, the movie teaches how age and gender cannot be a bias to learning. Kahaani : this is the story of a pregnant woman who is on a mission to find her missing husband. She’s strong and willing to take any risk on the streets of Kolkata. A movie with one of the best climax scenes possible. Angry Indian Goddesses : every girl dreams of a crazy bachelorette with her squad, this is what happens in the movie too. A bunch of girlfriends meet up in Goa and share their lives with each other and end up doing some of the craziest stuff. Nil Battey Sannata : the empowering story of a household help played by SwaraBhaskar, who is determined to get her daughter educated. The daughter on the other hand is not pleased with the thought of going to school so her mother comes up with altogether a different plan. A must watch Highway : the story of Veera who gets kidnapped and ends up finding peace and strength on the journey. She gathers the strength to fight her childhood fears and scars and voices her opinion on them and question the society. Fiza : The role played by Karishma Kapoor is in search of her brother who had been missing for a long time. On finding him, she discovers that he is a part of a terrorist group. The movie reveals the strength of Fiza in striving to find her brother and later coming to terms with the reality. Dil Dhadakne Do : though the main focus was on the dysfunctional families of the high society, it finely depicts the independent characters that Priyanka and Anushka were. Both of them were financially independent and both had to go against their families to achieve that feat. Though Priyanka is put down by her parents and her husband, she stands up for what she wants. In fact, Farhan Akhtar perfectly points out in one of the scenes what Feminism actually is. Margarita with a straw : the movie talks about the most sensitive aspects of the society like disability and society in general. Kalki’s character embarks on a journey which is as much about feminism. Kalki’s best performance till date. Mardaani : the film is packed with action and a thrilling story revolving around the life of a police officer Shivani Shivaji Rai. Mary Kom : the biography of India’s Olympic champion boxer, Mary Kom, played by Priyanka Chopra. The story narrates the courage and determination one needs to fulfil their dreams. This movie has feminist inclination as well as a matter of national sentiments. Piku : the movie showed the struggles of a young independent woman juggling her personal and professional life. Piku was content with whatever her life was aiming at her and was not willing to give up on any of it. A daughter and a working woman, roles most of the woman play in their daily lives. Neerja : based on a the real life story of a Pan Am flight attendant who lost her life in the process of saving her passengers from a hijack. One of the most inspirational films of the year, depicting a young woman’s courage in being true to her duty.