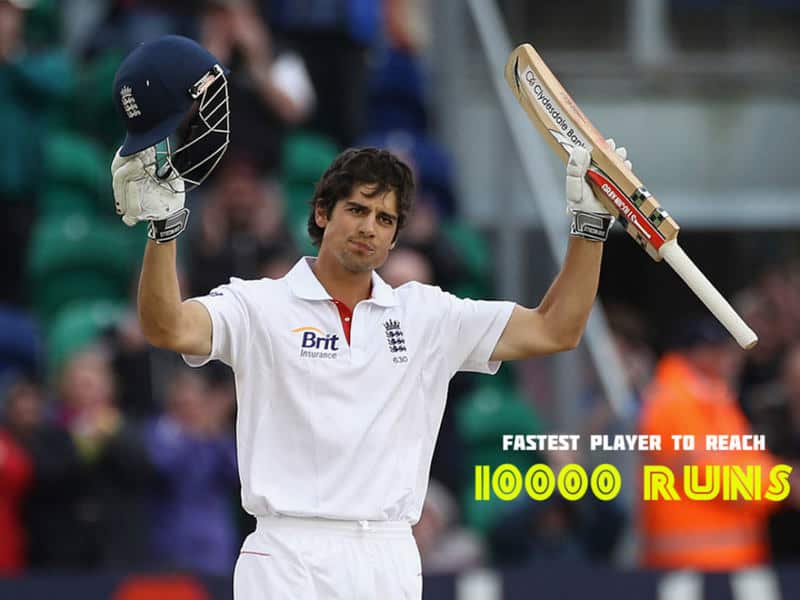 As Alastair Cook tucked the ball for four off the bowling of Nuwan Pradeep in the second innings the Durham Test, he made history. He became the first English player to reach 10,000 Test match runs. When you think there have been 670 men that have played for England – Cook was number 630 – it is quite an achievement. While there have been 11 batsmen that have passed the 10,000 run mark, none have been from England, until now. This is all the more remarkable when you consider that they play more Tests than anyone else. Of those 11 men who have crossed this threshold before him, only Sunil Gavaskar was an opening batsman. Gavaskar has “only” 10,122 runs so the England captain will soon be the highest run-scoring opening batsman of all time.

Cook has been playing Test cricket for just over 10 years now and it that period he has played more Tests than anyone else, but also made more runs and more fifty plus scores than any other batsman. He has been almost ever present in the England side, and while there have been fairly extended periods of poor form – most notably his spell in between 2013 and 2015 where he went 35 Test innings without a hundred – he has always warranted his place in the team as an opening batsman.

It is strange to think that Alastair Cook is still only 31 years old. It seems that the Bedford choir boy and farmer’s son has been part of the cricketing landscape in England forever. He could well play for long enough to pass 200 Test matches, what is certain from his early season form for Essex, which has seen him score 523 county championship runs at an average of 130, Cook has not lost his hunger.

Cook made his first-class debut in late summer of 2003, but it was two years later that he really made a name for himself. He and Ravi Bopara battered the touring Australians in a partnership of 270 as Cook plundered 214 against a bowling attack that included Jason Gillespie, Michael Kasprowicz and Stuart MacGill. While Cook was already having a decent first-class season and had a track record of cricketing success for as long as he has been big enough to pick up a bat, it was the nature and number of runs against England’s arch-enemies that got people really excited.

There was a certain amount of dashing intent in that innings against the Australian tourists back in 2005, but since then Cook has stripped back his technique. He has a T20 hundred for Essex, but in Test cricket he plays three run scoring shots – the nudge off the legs, the cut shot to a wide ball and the drive though wide mid on which he often lofts against the spinner. Anything else is a novelty. His insistence of only playing to his strengths is further evidence of his awesome powers of concentration – something that has been evident from when he was a teenager. His best shot in Test cricket is the leave outside off stump, something he does better than anyone who has played for England in the last two decades.

It was that winter that Cook made his Test debut, called up to the Indian tour in March 2006 from the A side trip to the Caribbean when England lost both Michael Vaughan and Marcus Trescothick to medical conditions. He had travelled for hours, had virtually no time to acclimatise and scored 60 in the first innings and 104 not out in the second. At the age of just 21, this debut was an insight into the mental strength and determination that would both aid and hinder Cook in the decade to come.

There are moments in Cook’s career that are worthy of criticism. His captaincy has been naïve at times and clueless at others, but it has improved of the nadir of the fourth day of the Headingley Test against Sri Lanka in 2014 where it looked like the work experience kid had been put in charge of a nuclear reactor. Cook became the lightning rod for so much of the anger over the decision and subsequent handling of the firing of Kevin Pietersen, and while some of it was deserved, most of it wasn’t. Those above him in the England and Wales Cricket Board made that call and were the ones who lost the PR war.

Cook’s image as the poster-boy for the ECB line, as they systematically alienated almost every cricket fan in the country in its ham-fisted handling of the Kevin Pietersen saga, has harmed his public persona with certain sections of the cricketing Twittersphere. But there is little real justification for it.

The only time in his long career that it looked like he would lose his place in the team was during the summer of 2010 when he had scored just 106 runs in eight innings. He had decided to rework his technique that year in the hope of finding more consistency, the only thing it brought him was consistently poor performances. In the third Test against Pakistan, he had made the decision to return to his old style of batting and grinding his way to the ugliest Test hundred that you will ever see. He reached three figures when Mohammad Asif threw the ball over his head for four overthrows.

At the start of that match, there was talk of him not making it to the last Test of the summer at Lord’s, let alone the trip to Australia that winter. By the end of it, he had booked his place on the plane for England’s first win in Australia, where Cook scored 766 runs across the five Tests. He was part of the side that claimed the number one Test ranking spot the next summer in a series against India, where he made 294 at Edgbaston. After a terrible summer in 2010, he ended the year with 1287 runs.

Most worrying for England is what they do when Cook finally decides to retire. They are still searching for a long-term replacement for Andrew Strauss, who gave up Test cricket four years ago. How they would go about finding someone to fill the shoes of their leading run-scorer and the second most successful opening batsman of all time is a question that will trouble the greatest of philosophers.