Watch the trailer of Patel S.I.R right now for some chills!

Jagapathi babu has played humongous number of roles for his numerous movies. He has played roles of a cop, an action hero, faction hero, casual guy, brother, father, villain and everything and anything. He surely proved to people of all ages and generations that he can be that one actor to surely look for. To add up his pile of classics, here comes an interesting film, Patel S.I.R.

Here are those movies by this legendary actor that are so damn different.
1. Patel SIR
We acknowledge his muscular body and his goofy voice. Except that this a definitely an intense thriller, clues are hard to find. Whatsoever, this surely will take a high!

Watch the trailer for more assurance that this movie will kill it.

2. Nannaku Prematho
He played the role of a billionaire, father, and villain with class.

3. Legend
This movie had him as a faction villain whose voice is the threat and whose presence is the terror.

4. Lakshyam
An honest cop and the best brother!

5. Hanuman junction
A friend-turned-foe due to rage and ego. He had many shades to show and showed them with utter clarity.

6. Manoharam
This movie had the female in the bigger role for she tries to save this simple bank employee who is her husband from the terrorists. He had played it apt and was a find for the role.

7. Gaayam and Gaayam 2
He played the role of a simple man who turned down into a good-goon by taking revenge against the person who killed his brother.

Here Are 15 Basic Camera Angles, Shots Every Aspiring DOP & Filmmaker Should Be Aware Of

Few Facts About These Tollywood Films & Actors Are Nothing But...

14 Telugu movies that were a part of graphically successful Telugu...

11 Chinese Dishes that are seen only in India

Summer seasonal fruits and their benefits 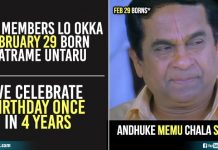