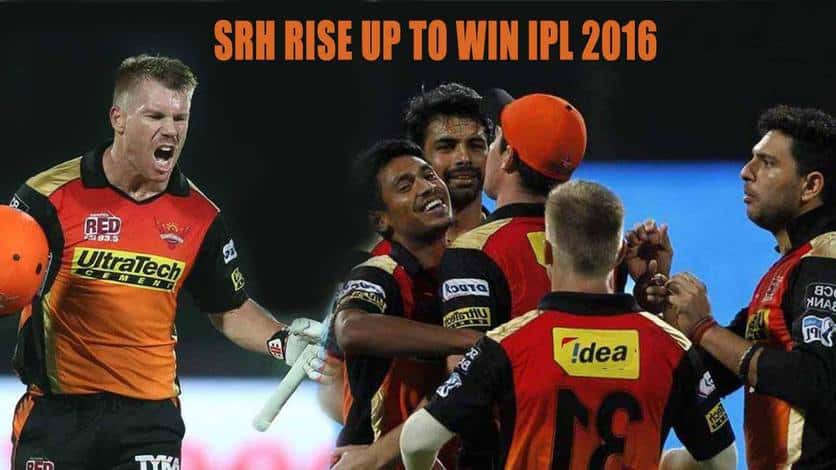 The Sunrisers Hyderabad (SRH) bowling arsenal trumped the Royal Challengers Bangalore (RCB) batting juggernaut to win the Indian Premier League (IPL) 2016 Final by 8 runs. Chris Gayle and Virat Kohli gave RCB every chance to chase down the total with a 114-run opening stand, but once both openers were dismissed RCB ran out of steam. Bhuvneshwar Kumar, Ben Cutting, Mustafizur Rahman, Barinder Sran, and Bipul Sharma put in a consolidated bowling effort to award SRH a deserving maiden IPL title. For RCB it was yet another heartbreak after losing the final for the third time.

Gayle and Kohil batted frenetically at the start of the innings, punishing everything loose the SRH bowlers dished out. Gayle, who had been in indifferent form throughout the tournament, chose the perfect match in which to show his usual class. The big Jamaican hammered 76 off a mere 38 deliveries with 4 fours and 8 sixes to dominate the opening stand. He was finally done in by a slower ball from Cutting that was well caught by Bipul at third man.

We did it! We're the #VIVOIPL Champions of 2016. Let's celebrate Hyderabad #OrangeArmy pic.twitter.com/dqNQak9L5c

Kohli, who was happy to let Gayle do the damange till now, took charge at the fall of the first wicket. He was on 32 off 25 balls when Gayle was dismissed. He smacked Cutting for a boundary off the next ball before smacking Bipul for another boundary in the next over. Sran was smashed for six to bring up Kohli’s seventh half-century of the tournament, to go with his four tons. Sadly for RCB, Kohli missed out on reaching the 1,000-run mark when he inside-edged an attempted cut onto the stumps. Kohli was bowled for 54 off 35 balls with 5 fours and 2 sixes.

Kohli’s dismissal was the turning point. AB de Villiers, who took them into the final with an tremendous unbeaten 79, was unable to last long and mis-hit Bipul to Moises Henriques for 5. KL Rahul was bowled by Cutting for 11 off 9 and Shane Watson holed out to Henriques off Mustafizur for 11. RCB had crashed from 114 for 0 to 164 for 5, with an almost impossible chase ahead of them. Stuart Binny hit a six off the first ball he faced but ended up getting run out for 9 off 7 balls off the first ball of the penultimate over.

With 29 runs now needed off 11 balls, Sachin Baby and Chris Jordan managed to sneak in 11 runs thanks to Baby’s last-ball six. RCB still needed an unlikely 18 off the final over. Bhuvneshwar started with a full toss but Jordan could only take a single. The next ball was another full toss, but Baby was only able to get it away for 2. Now 15 were needed off 4. Jordan was run out with a direct hit to the bowler’s end by the wicketkeeper off the next ball. With 15 runs to win off 3 balls, Bhuvneshwar bowled another superb delivery that could only produce a single. Now it would take a miracle for RCB to win. Bhuvneshwar ensured that did not happen, and SRH won by 8 runs.

Earlier, David Warner took the RCB bowling attack to the cleaners en route to an attacking 69 and Ben Cutting played a thrilling 39 off 15 balls to propel SRH to a massive 208 for 7. Warner smashed the RCB bowling to all ends of the M Chinnaswamy Stadium on his way to a 24-ball half-century. His opening stnad with Shikhar Dhawan amounted to 63 in only 6.4 overs before Dhawan top-edged an attempted sweep off Yuzvendra Chahal to Chris Jordan for 28 off 25 balls with 3 fours and 1 six. Chahal returned the favour a few overs later, catching Moises Henriques off Jordan’s bowling. Henriques was out for 4 off 5 balls.

Yuvraj Singh walked in at No. 4 and played a gorgeous cover drive early in his innings to continue RCB’s misery. The duo put on 28 attractive runs before Warner was dismissed against the run of play. Sreenath Aravind, who had been hit for a slew of boundaries by Warner early on, got his revenge when the batsman got an outside edge to Iqbal Abdulla at short third man. Warner had scored a superb 69 off 38 balls with 8 fours and 3 sixes.

SRH were now in a bit of trouble, but Yuvraj was batting fulently at the other end. He played some gorgeous shots that turned back the clock. Deepak Hooda holed out to Virat Kohli off Aravind for 3 off 6 balls. However, Yuvraj was soon dismissed as well, getting caught by Watson off Jordan. Yuvraj had scored a superb 23-ball 38 with 4 fours and 2 sixes. Naman Ojha was run out by Watson for 7 off 4 balls, and Bipul Sharma holed out to Chahal off Jordan for 5 off 3 balls. At 174 for 7 in the 19th over, it looked like RCB would restrict SRH to under 200.

Ben Cutting, though, had his own ideas. He slammed Watson for a six and a four in the 18th over, then got another boundary off Jordan in the 19th over. His real carnage came in the final over: Watson was absolutely mauled for four, six, six, and another six to end the over. Cutting ended up unbeaten on 39 off a mere 15 balls with 4 sixes and 3 fours as SRH ended at a formidable 208 for 7.