So it has done the impossible. ‘Baahubali – The Conclusion’ has broken all the records of collections in Indian Film Industry. It has reached the four digit mark. 1000 Crore gross collections worldwide! That feat will need another extraordinary film to reach! Regarding the achievement the film fraternity has been giving numerous accolades. Released on April 28, Bahubali 2 has continued to storm the ticket counters in the second week. The movie has crossed Rs.1,000 crore mark at the worldwide box office in nine days.

Overwhelmed by the success, Prabhas took to his Facebook account thanking all his fans, family and the makers. He said, “To All My Fans, a big hug to each one of you for all the love that you’ll have showered on me. I have tried my best to go through a lot of the efforts that you all have put to express your affection for me from different parts of India and even overseas. I am truly overwhelmed with everything. The journey of Baahubali has been a long one but among the few things that I will take away from this, is all of you. Lots of love back to you all. A big thank you to SS Rajamouli sir for believing in me to carry his huge vision to the masses, giving me a once-in-a-lifetime character of Baahubali and making the entire journey so special.”

As a tribute to this special achievement, these fans of ‘Baahubali’ have made a tribute cover of the song ‘Dandalayya’ from the movie. Specially made as ‘Breath-Based’ tribute, the duo SinjithYerramilli and KarraShesha Sai have played it by Melodica and Whistle respectively. SinjithYerramilli, a self-learnt musician and an engineering student and KarraShesha Sai, is working as a marketing head for a company and is a student of Whistle wizard K Siva Prasad. Speaking on this cover they said, “Baahubali is an emotions for all the cinema lovers. The beginning itself bought us an immense respect to that movie and while coming to the conclusion it left us speechless. A big bow to the entire cast and crew. The main idea of our music cover is behind the box-office collections hitting the 1000 crore mark. Then we decided to do something as a mark of respect to the magnum opus. We practiced it on the spot and recorded the cover of Dandalayya this way to present it in a unique way. It’s usually very hard for us to perform because both the sounds produced are breath based.” 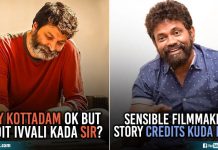 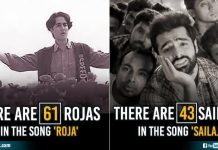 We Counted The Number Of Times Our Heroes Took A Heroine’s Name In Songs, Just Coz Of Lockdown

When your parents are on Social media

Tollywood star kids for whom Tollywood fans are eagerly waiting for

‘What The F’ Song Goes Really Wrong And Meme Rowdies Are...