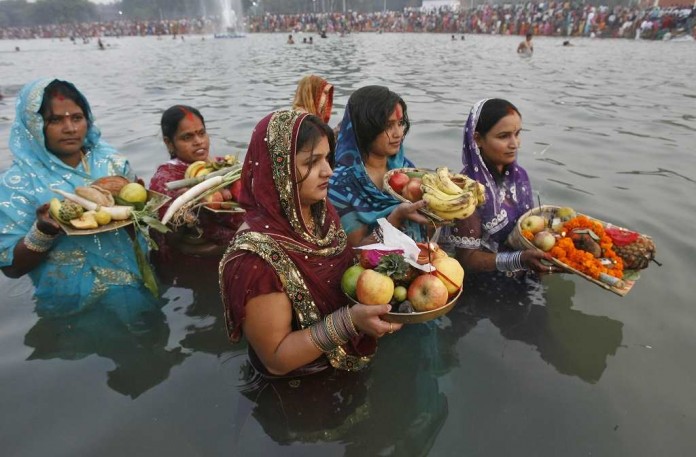 Chhat Puja begins for millions of Hindus across UP and Bihar today. But what really is Chhat Puja?

Chhat Puja is an ancient Hindu ritual to worship the Sun god and Chhathi Maa (ancient goddess Usha). The puja conducted to thank the Sun God for sustaining life on earth and for fulfilling the prayers of devotees. Apart from UP, Bihar, the festival is also observed in other areas with Hindu populations, including Nepal, and some regions of Mauritius, Fiji, Guyana and Jamaica.

The festival is a detailed four day celebration which requires faith and steadfastness. The first day is called Nahay Khay, in which the devotees take a dip in a river and carry the water back to their home for Puja. The women observing the festival partake of food only once in a day.

The second day is Lohandra. This is a day of rigorous sacrifice, as women who observe the festival abstain from drinking even a drop of water for 36 hours. Delicacies like kheer, puris and other traditional food items are prepared and distributed among family and friends.

The third day is called Sandhya Arghya, and is spent in preparing offerings at home. In the evening, the entire family travels to the river or lake and offer prayers to the setting sun. Folk songs are sung and the entire area is filled with festivities and celebrations.

The final day of the celebrations is Usha Arghya, where the entire family goes to the river banks and prays to the rising sun. Special dishes are cooked and distributed among family and friends. The food is strictly vegetarian, and mostly prepared without the use of onion and garlic. Chhat Puja is celebrated by all the Hindu families, unless there is a death in the family that year.

This marks the end of the four day festival, as people get back to their lives, having observed four days of prayer, ritual, and revelry.

In case you’re celebrating Chhat Puja, here are heartfelt wishes from everybody at Wirally!